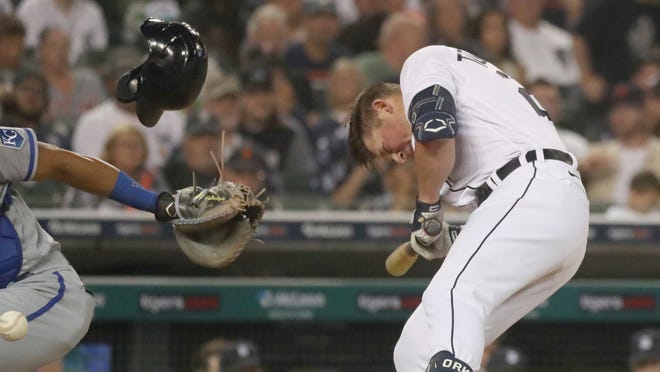 Where: Comerica Park in Detroit.

FRIDAY’S LOSS:Tigers strand too many in scoring position in 3-1 loss to Royals

Game notes: It probably shouldn’t come as a surprise that a game between the fourth- and fifth-place teams in the American League Central — considered the worst of baseball’s six divisions — features multiple rookies. After all, both the Tigers and Royals have been rebuilding for a while, and the kids gotta get their starts somewhere, right?

But Saturday afternoon’s matchup could feature as many as six rookies among the 20 starting hitters and pitchers — two for the Tigers and four for the Royals — despite Spencer Torkelson sitting out after a breaking ball to the helmet on Friday night. Here’s how they break down:

DH Vinny Pasquantino: The Royals entered the year with two Triple-A first basemen among their top three prospects, according to MLB Pipeline. Pasquantino, 24, is the older of the two, and has crushed at every level of the minors since the start of 2021, with OPSes of .950, .965 and .948 in High-A, Double-A and Triple-A. Called up Tuesday, the 2019 11th-rounder was hitless until a homer off Michael Pineda in the fourth inning Friday.

SS Bobby Witt Jr.: The son of longtime MLB hurler Bobby Witt Sr., the No. 2 overall pick in 2019 turned 22 a little over two weeks ago. His batting average isn’t impressive, but when he has made contact, it’s been with power: 16 doubles, an MLB high five triples and 11 homers in 276 at-bats, plus 12 steals in 14 tries. He’ll receive some AL Rookie of the Year votes (though Seattle’s Julio Rodriguez is the favorite for now).

RHP Beau Brieske: That a 27th-round pick from 2019 is already making his 13th start of 2022 season tells you a lot about the Tigers’ season. Brieske had a stellar three-game stretch in early June in which he allowed just two runs in 18 2/3 innings against the Yankees, Blue Jays and Rangers. But his past two starts, against the Red Sox and Diamondbacks, have been more mundane, with nine runs allowed on 11 hits and three walks over 8 2/3 innings.

CF Riley Greene: We’re not saying ALL the 21-year-old does is get on base, but since his callup on June 18, he has 11 hits and nine walks in 48 plate appearances, good for a .417 OBP. Still, just one of those hits has been for extra-bases, a far cry from his minor-league days; he slugged .534 in Double- and Triple-A last season.

After Saturday’s game, the two teams finish the series with a 12:05 pm start Sunday, with no Bally Sports Detroit broadcast. Instead, the game will air on NBC’s streaming service, Peacock (which you may remember from February’s Winter Olympics in Beijing). BSD diehards can still get their Craig Monroe fix, though; he’ll be part of an unusual “announcer-free” broadcast, along with Sparta’s Ahmed Fareed, that will seek to explore Comerica Park like the fans do.