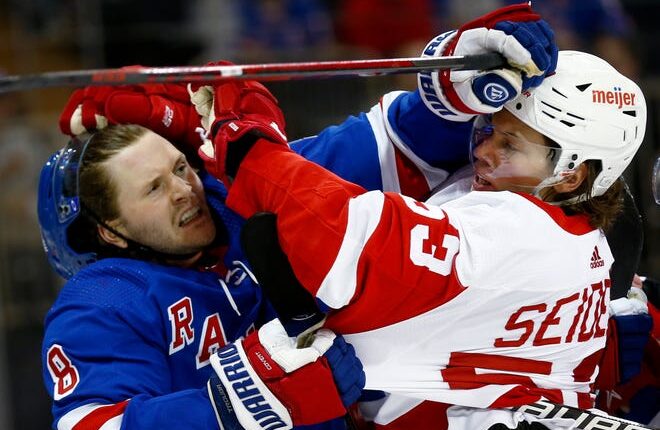 The Original Six rivalry against the New York Rangers resumed Thursday after being dormant for a season because of the pandemic. Greiss made 34 saves through regulation and another three in a furiously paced overtime. Pius Suter secured a 3-2 victory when he scored in the sixth round of a shootout.

The Wings (23-22-6) had gone 0-for-3 on man advantages when Mika Zibanejad converted 34 seconds after Robby Fabbri took a tripping penalty in the third period.

The Rangers used a timeout during the first period to show a minute-long tribute to Marc Staal, the veteran defenseman who played 13 seasons with them before being traded to the Wings in September 2020. The Wings had a good start to the game, playing sound hockey that yielded a goal from Troy Stecher less than three minutes after the puck dropped.

Dylan Larkin restored Detroit’s lead with his 26th goal, 90 seconds after K’Andre Miller had scored an equalizer in the second period. Larkin was denied a chance in the final minute of regulation.

Larkin extended his scoring streak to seven games when he scored at 13:48 of the second period. Moritz Seider earned his 30th assist when he sent the puck to Danny DeKeyser, who fired a shot from the blue. Igor Shesterkin stopped that shot, but Larkin connected on the rebound, firing a shot into that sank into the top corner of the net. That was the sixth goal Larkin has scored since netting two Jan. 29 against the Toronto Maple Leafs. Larkin also has seven assists during the stretch, including a three-point night Feb. 12 against the Philadelphia Flyers.

Greiss got his second start in three games after not playing for a month partly because he was in COVID protocol and partly because Alex Nedeljkovic was on such a roll. Greiss made eight saves in the first period, including stopping Barclay Goodrow’s wrist shot from just outside the crease and denying Chris Kreider on a backhand attempt. Greiss turned away Artemi Panarin’s wrist shot from the low slot in the second period, and followed up with another save on Goodrow. The Rangers didn’t break Greiss until their 20th attempt, when Miller scored on a wraparound. The Rangers outshot the Wings, 17-12, in the second period.

Stecher has gone through a challenging season: He was a healthy scratch at times the first month, and then suffered a wrist injury that sidelined him two months. He returned to the lineup Feb. 12 (and got into a fight Feb. 14 at Minnesota) and netted his first goal of the season Thursday. Stecher got the puck from Adam Erne, strode to the top of the right circle, and fired a shot through traffic that ricocheted off a Rangers defender and past Shesterkin. Joe Veleno also assisted, picking up his third point in five games.