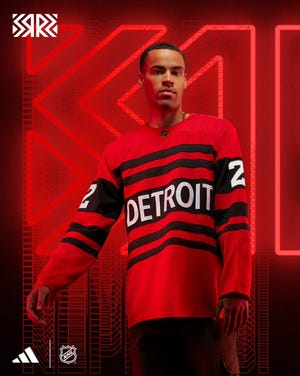 Detroit Red Wings fans perennially hoping the team would add a third jersey in black got their wish Thursday — sort of.

As part of the second iteration of the NHL’s and Adidas’ “Reverse Retro” alternate jersey program, the Wings will wear a red-and-black striped jersey that harkens back to the franchise’s 75th anniversary sweaters worn during the 1991-92 season — which was itself a throwback to the franchise’s sweaters from 1927-28, when they were known as the Cougars.

Accordingly, the jersey won’t have any version of the “Winged Wheel” logo adopted in 1932, instead featuring “Detroit” in block white letters across a black stripe. The Wings’ kit won’t be entirely without the wheel, however; the team will wear a black-and-white version of the logo on its red pants.

THE CAPTAIN:Why Dylan Larkin’s ’emotional’ play sums up what Red Wings want to do

Adidas announced the jersey as “a bold all-red execution combining the jersey, pant, socks, gloves and helmet accented with black trim,” meaning, technically, the team still won’t have a black jersey. Still, as the company notes, the jerseys are the first-ever game-used gear for the Wings featuring black.

All 32 NHL teams will get new retro-inspired jerseys this season — even the Seattle Kraken, who are in only their second season of existence — to be worn on special designated nights in head-to-head matchups beginning Nov. 2. The league drops the puck on the special nights with a nationally televised matchup of the Buffalo Sabers (wearing a white and royal-blue version of their 1996-2006 “Goathead” jerseys) and the Pittsburgh Penguins (wearing a black version of their 1993 “RoboPenguin” jersey) on Nov. 2 (7:30 pm, TNT).

The Red Wings have not announced all of the dates they’ll be wearing the alternates, though the Anaheim Ducks announced they’ll be wearing theirs (a white and orange version of their inaugural in a home game against the Wings on Nov. 15, Likewise, the Montreal Canadiens will wear theirs (featuring the traditional interlocking “H” and “C” on a light-blue base that appears to be a tribute to the departed Montreal Expos of MLB ) at home against the Wings on Jan. 26.

When will the Wings wear the black-and-red outfits at home? There are several early candidates for the home debut of the kit, with the Wings’ schedule featuring eight games at Little Caesars Arena in November. That includes three dates against Original Six teams: Nov. 8 vs. the Canadiens (though we know the Habs won’t be wearing theirs on this date, ruling it out for the Wings), Nov. 10 against the NY Rangers and Nov. 28 vs the Toronto Maple Leafs. The other November visitors: Washington Capitals (Nov. 3), New York Islanders (Nov. 5), Nashville Predators (Nov. 23), Arizona Coyotes (Nov. 25) and Sabers (Nov. 30). Of the seven possible November candidates, only the Sabers’ “Reverse Retro” jersey is white, for maximum contrast with the Wings’ jersey.

“Each design captures the team’s unique spirit that connects the past with the future,” said Brian Jennings, NHL chief brand officer and senior executive vice president in a news release. “We look forward to rekindling the passionate discussion and debate among team fanbases that this simultaneous launch of all 32 designs is sure to generate.”

The jerseys for all teams go on sale beginning Nov. 15 at team stores and online via adidas.com and the NHL’s store, expanding to other retail sites on Nov. 20.

This year’s set for the Wings is a definite departure from the previous “Reverse Retro” set, worn during the abbreviated 2020-21 season, which was white with thin gray stripes and a red “Winged Wheel.” The jerseys were still worn with red pants, creating a look not particularly different from their normal appearance.

KHN’s ‘What the Health?’: Biden Hits the Road to Sell Democrats’ Record