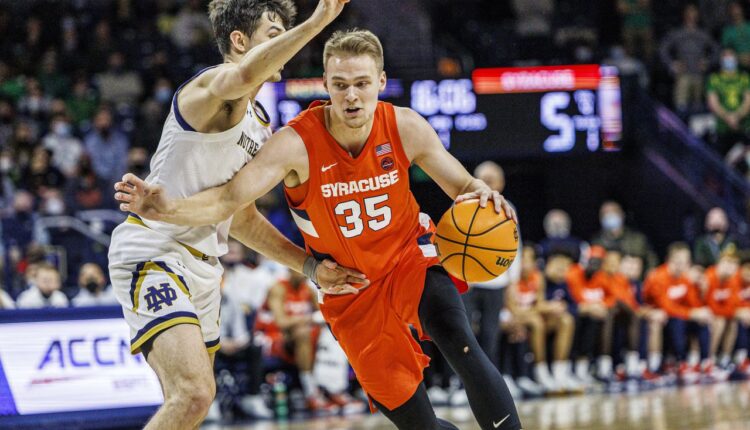 Syracuse, NY ― While Buddy Boeheim wasn’t taken during the NBA’s draft on Thursday night, the Syracuse guard will get a chance to make it to The League.

The Detroit Pistons signed Boeheim to a two-way deal immediately after the draft had been concluded.

A two-way contract stipulates that a player’s salary is dependent upon whether the player is in the NBA or the G-League. The Pistons’ G-League affiliate is the Motor City Cruise.

Murphy reportedly scouted Boeheim this past season and wanted to sign him.

He finished his career with 309 made 3-pointers, second only to Gerry McNamara’s school record of 400. For his career, Boeheim made 36.2% of his 3-point attempts, all while being the focal point of opposing defenses as a junior and senior .

Boeheim will most likely play for Detroit’s entry in the NBA’s Las Vegas Summer League, which runs from July 7-17.

Cole Swider found right situation at Syracuse; can it find it again in NBA?

Faith, family and how Syracuse’s Judah Jah Mintz got his name

2022 ACC/Big Ten Challenge: Who is SU’s most likely opponent?