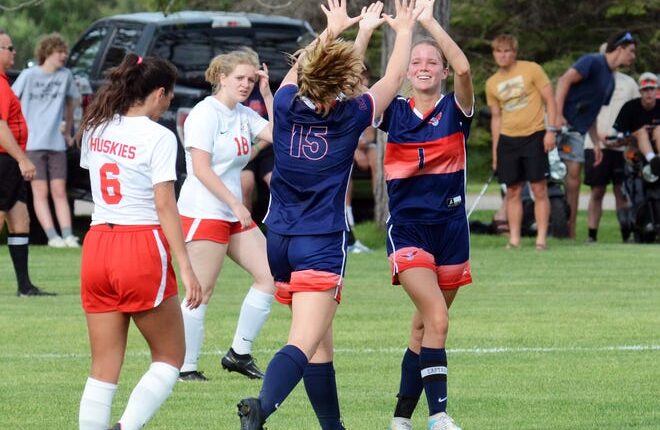 BOYNE FALLS — Have yourself a Day.

The Boyne City girls’ soccer team did, and does, which it’s one of the reasons why the Ramblers are moving on within their Division 3 district after Tuesday.

Behind four goals from junior Elly Day, Boyne City got off to a rolling start and exited Tuesday’s hosted district game with an early 8-0 mercy rule win over visiting Benzie Central.

“We put some nice things together, we started quick so I was glad they did some of the things that I asked them to,” Boyne City coach Ross Daniels said.

Day collected the four goals and added two assists to stand out on the night, one of a few in Daniels’ eyes that helped get the team off to that hot start.

“She was fantastic,” said Daniels on Day. “She’s had a couple other games of multiple goals and multiple assists, but it’s been a little while. She looked comfortable, Braydin Noble looked comfortable and it was big to get a few minutes back to Maddie Smith, who we haven’t had for a few weeks due to injury.”

The Elks advanced with a 6-0 win over Traverse City St. Francis to open the day at the Boyne Mountain field.

Along with Day, Boyne City’s Mackensy Wilson scored two goals and added an assist, Noble had a goal and three assists and Lydia Frasz scored one goal. Gabby Dunlap also added an assist.

Boyne City held a 7-0 lead at the half, then brought on the mercy win with 21 minutes left to play in the second half on the score by Frasz.

Boyne’s Mya Pofahl earned the shutout victory in goal for the Ramblers, making one save, while they had 17 shots on goal total. Boyne also hit the crossbar five times on the night.

Part of where the Ramblers put together success came from their communication on the field between each other, which Daniels has been stressing.

“It’s one thing that I’ve been asking and the other coaches have been asking, is to pick that communication up,” said Daniels. “It solves a lot of problems, so I’m very happy to see that. Of course, the coach in me believes it can be better.”

Boyne City improved to 7-6-2 overall on the season, with their schedule hit hard by cancellations early and late and not having hosted a game since the first week of May.

In previous meetings with Elk Rapids (15-2) this season, the Ramblers took losses of 2-0 and 5-0 and Daniels knows Thursday will be a heck of a challenge to get through if his team wants to make another run at the state finals in 2022.

“It’s going to be a big challenge,” he added. “That’s part of what we were talking about (after), getting the girls mentally ready along with just physically ready after today with the heat. It’ll be a good challenge to be here in a final, in a knockout game.”

GRAYLING — The Harbor Springs girls’ soccer team is moving on to a district championship game, punching their ticket with a victory over Grayling Tuesday.

The night didn’t come easy for the Rams, as they just squeezed out a 1-0 victory to advance within their Division 4 district.

It came as a third straight game in which the Rams have scored a goal or less, though they’ve also now won four of their last five games.

Harbor Springs (12-7-1) will now head to Suttons Bay this Thursday, June 2 to meet Glen Lake for the district championship. The Lakers advanced with a 6-0 win over Charlevoix Tuesday.

Against Grayling, senior Claire Hayhurst scored the lone goal for the Rams, while Hailey Fisher earned the shutout victory in goal.

It came as the ninth shutout of the season for Fisher and the Harbor Springs backline this season.

Game time against Glen Lake is set for 5 pm in Suttons Bay.