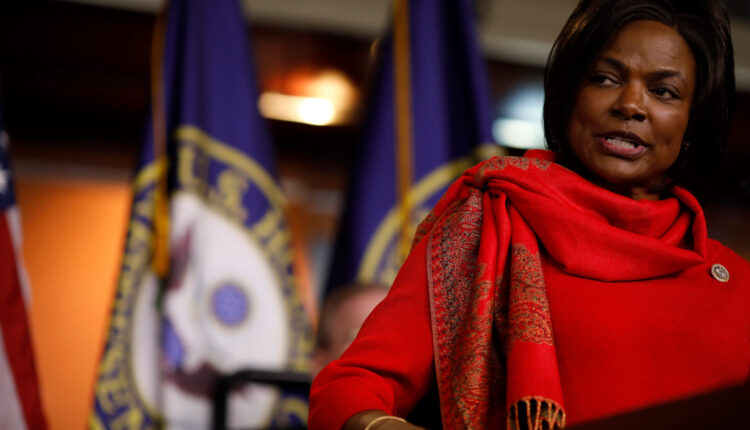 WASHINGTON — President Joe Biden is expected to meet with Senate Democrats on Thursday to push for the swift passage of two voting rights bills, and members of the Congressional Black Caucus are applying pressure for action as well.

During a press conference at the Capitol on Wednesday, caucus Chair Joyce Beatty said that members are concerned about Republican-led state legislatures’ enactment of strict voting requirements in response to the false claim by the former president that there was voter fraud in the 2020 presidential election.

“Look at some of the laws they’re putting in place,” Beatty, an Ohio Democrat, said. “For us, the urgency is now.”

Senate Democrats are engaged in an internal debate over changing the Senate’s filibuster rules, which currently require a 60-vote threshold to advance legislation, to pass the John R. Lewis Voting Rights Advancement Act and the Freedom to Vote Act.

So far, at least 19 states have passed 34 laws restricting voting access, according to the Brennan Center for Justice at the New York University School of Law.

Members of the Congressional Black Caucus, such as Rep. Joe Neguse, said that the stakes couldn’t be higher.

“The eyes of the world are on you,” the Colorado Democrat said, addressing members of the Senate.

Rep. Val Butler Demings, a Florida Democrat, said that growing up, her parents instilled in her that voting was about civic duty.

This week, the president on a trip to Atlanta also made a pitch for amending the Senate filibuster rules to pass voting rights legislation.

“I think the threat to our democracy is so great that we must find a way to pass this voting rights bill,” Biden said. “Debate them, vote, let the majority prevail and if that bare minimum is blocked, we have no option but to change the Senate rules including getting rid of the filibuster.”

“Unfortunately, President Biden has rejected the better angels of our nature,” said McConnell, a Kentucky Republican. “So it is the Senate’s responsibility to protect the country.”

“This institution was constructed as a firewall against exactly this kind of rage and false hysteria. It falls to the Senate to put America on a better track.”

The White House on Wednesday announced that Biden and Vice President Kamala Harris will continue to call senators throughout the week and push for their support in passing voting rights legislation, in addition to the Thursday meeting.

Senate Majority Leader Chuck Schumer, a New York Democrat, has vowed that the Senate will vote by Martin Luther King Jr. Day, which is Monday.

At a press conference earlier this week, Schumer said that Democrats were running out of time to pass voting rights legislation.

“Failure is not an option for the democracy of America,” he said.

But any change in the filibuster is contingent on two key Democratic votes, Sens. Joe Manchin III of West Virginia and Kyrsten Sinema of Arizona. Both senators have opposed any changes to the Senate rules.

Schumer will have to get all Democrats in the evenly divided Senate on board.

“We’re having a lot of serious, long, and intense meetings with Senators Manchin and Sinema,” he said Wednesday, according to Capitol Hill pool reports.

He added that nine senators met with Manchin and Sinema for several hours late Tuesday, trying to come to an agreement.

“We’re trying to come to a place where 50 senators can support two bills, the Freedom to Vote Act, and the John Lewis Act, and with a change in the rules, so we can get the votes to pass these bills into law,” Schumer said.

Only one Republican, Sen. Lisa Murkowski of Alaska, has said she would support Democrats in passing the John Lewis measure.

The John Lewis bill, named in honor of the Georgia lawmaker and civil rights icon, would bolster the Voting Rights Act by establishing a new formula to require all 50 states to get special permission from the Justice Department before making any changes to voting laws or putting in place new voting requirements.

Rep. Kweisi Mfume, (D-Md.), said that passage of the John Lewis legislation would pay tribute to the late Georgia congressman who continued to fight for voting rights throughout his congressional career.

“The tragedy is we are now fighting the same fight that many of us thought was behind us,” he said.

The Freedom to Vote Act would establish Election Day as a national holiday and set minimum standards that each state must have for elections, such as two weeks of early voting and an option for same-day voter registration.