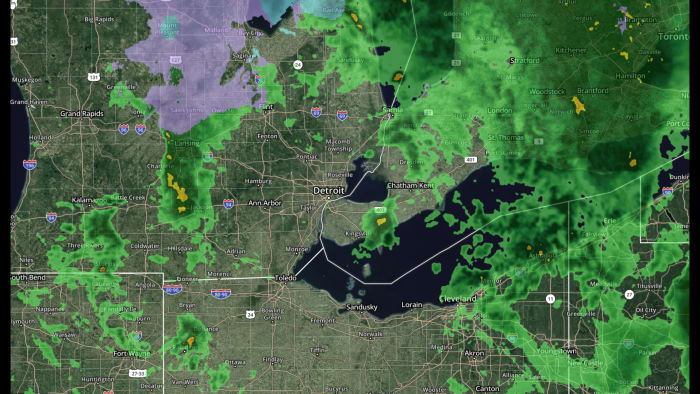 DETROIT – The highly anticipated warm front made it into Metro Detroit on Tuesday, but not all of us reaped the benefits.

Once the front was angled from northeast to southwest across the area, it became parallel to the steering winds aloft and basically stopped. So as of 3:45 pm Tuesday, the front was between Goodrich and Grand Blanc in Genesee County, between Oxford and Lapeer in northern Oakland/southern Lapeer counties, and between Sandusky and Snover in Sanilac County.

A cold front will cross the entire area Tuesday evening, taking the rain with it, and also crashing our temperatures, which will fall into the mid-20s (-4 degrees Celsius) by dawn, with south winds shifting to the west and increasing to 15-25mph.

Rest of this week

Mostly cloudy, breezy and cooler on Wednesday, with highs in the upper 20s (-2 to -1 degrees Celsius). A northwest wind at 10-15 mph will make it feel cooler.

Mostly cloudy Wednesday night, with lows in the mid-teens (-9 degrees Celsius), but potentially colder if any clearing takes place.

Mostly cloudy Thursday, with highs in the upper 20s (-2 to -1 degrees Celsius).

Snow develops Thursday evening. At first, it’ll likely be a patchy, light snow. But the snow pattern will fill in and become more robust later at night. Lows in the mid-20s (-5 to -4 degrees Celsius).

Snow Friday morning will end by lunchtime. At this point, I’m still expecting something in the 2-4-inch range of fluffy snow. Highs in the upper 20s (-2 to -1 degrees Celsius).

Saturday still looks like a great day to get out and play in the snow. Who can complain about partly cloudy skies and highs in the low 30s (0 degrees Celsius)? OK, so it’ll be breezy, but the sun will compensate –obviously, my glass is half-full.

A cold front should cross the area Sunday, with some inconsequential snow showers. It’ll still be breezy, and temperatures may fall from the low 30s (0 degrees Celsius) after the front comes through.

The Climate Prediction Center’s 30-day (March) and 90-day (March through May) outlooks both suggest above-normal temperatures, on average, with above-normal precipitation. Perhaps an early spring is on the way? We’ll see.