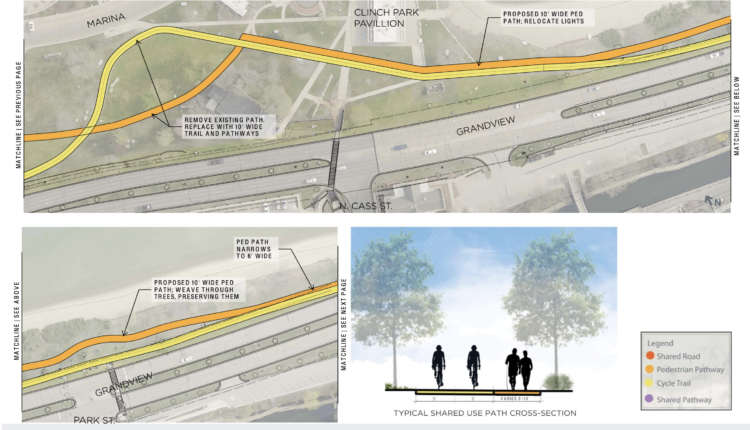 Traverse City planning commissioners are racing against the clock of a projected start date for the full rebuild of Grandview Parkway in Spring 2023 — a once-in-a-generation project expected to significantly transform the downtown freeway and impact the highway for months over the next year traffic and Parks and Recreation Commissioners will be considering plans to widen and expand the TART Trail as part of this project next week. Advisory group Progressive AE is assisting city officials, the Downtown Development Authority (DDA) and TART Trails with a conceptual design plan to more than double the trail width in places — up to 16 feet wide — and eventually expand across the Senior Center Down Peninsula Drive out to the Bryant Park intersection. Support from city officials could give TART Trails staff the green light to work on finalizing the engineering plans and securing funding to allow trail work to go ahead at the same time as the road remodeling next year.

City planning commissioners will review the TART Trail extension at their 7:00 p.m. Tuesday meeting, while parks and recreation commissioners will discuss the proposal at their 6:30 p.m. Thursday meeting. City commissioners and DDA board members are also expected to review the project at upcoming meetings. According to a memo from City Planning Director Shawn Winter, in addition to redesigning the road, the Grandview Parkway project provides “an opportunity to address non-motorized traffic improvements along the corridor.” The downtown TART Trail saw over two million trail visits annually in 2018 and 2019, according to trail counters, and “the increasing trend in trail usage is expected to continue,” says Winter.

Despite the trail’s heavy traffic and its prime location on “a prime waterway and bay,” according to TART Trails executive director Julie Clark, the trail is only 6 to 8 feet wide in many places and doesn’t have enough capacity to handle the growing summer traffic. “There just isn’t enough room,” says Clark. “We are working on expanding the track size and segregating usages so that it is a better and more comfortable track experience for users.”

Conceptual design plans show a 16-foot wide path with 10 feet for bi-directional bicycle use and six feet for pedestrian use. “The extra width will address capacity constraints, and new lane markings or physical separation of pedestrians and cyclists will resolve user conflicts by making room for modes of transport that travel at different speeds,” according to Winter’s memo. He noted that “a lot of attention is being paid to the potential impact of widening the trail on the waterfront parks,” adding that “there are instances where the pedestrian and bicycle components of the trail could be separated to preserve existing trees It is proposed to move the path alignment north along the volleyball courts to reduce the accumulation of winter snow now occurring due to plowing, while a proposed elevated crossing at Marina Drive would slow vehicles as they approach the path junction.

The expanded path would pass by Delamar Traverse City, Sunset Park, Traverse City Senior Center and NMC’s Great Lakes campus. A future trail connection could extend east from the senior center beach to and down Peninsula Drive, opening up the opportunity “for future connections to the NMC, Traverse City Central High School, Eastern Elementary School, the Civic Center and other places of interest in and around.” the base of the peninsula,” says Winter. However, staff noted that the path may need to narrow as it heads east due to right-of-way restrictions and expected lower usage. “Staff recommend further design work and time for more input to understand how a trail facility or improved non-motorized access will support community needs and address current issues related to speed, traffic and lack of safe non-motorized access along the trail.” Peninsula Drive,” Winter wrote. “Staff also believe further focus is required to enable improved non-motorized access at the intersection of Garfield and Front.”

Winter and Clark are part of a group of community leaders who meet regularly with the Michigan Department of Transportation (MDOT) as the state works to finalize its design plans for the Grandview Parkway. MDOT will hold two virtual public sessions next week on the recovery plans on Wednesday and Thursday from 5-7 p.m., including a question-and-answer period. State officials are likely to address non-motorized improvements at these meetings, with MDOT stating that the rebuild project will “improve safety at multiple intersections for all users of the highway and make crossings for pedestrians and cyclists more convenient and comfortable.” Noting that it is collaborating with TART Trails and Norte on design components, MDOT said it plans to add a “Peninsula Drive pedestrian crossing with an island refuge and wider sidewalks; add a pedestrian crossing and improve geometry on Front Street; improvement of pedestrian crossing at Division Street; and work with TART and the city to extend and, where possible, widen the trail to the east (Sunset Park, Hagerty Center, and Senior Center).”

Winter and Clark agree that MDOT has been open to ideas and feedback on design components for the project, including the TART Trail extension. “Our hope is to be able to make improvements to the trail at the same time as the parkway improvements, because that’s going to be a huge construction effort,” says Clark. “We want to make sure we stick together as much as possible. Ideally, we’d like to see the trail expansion unveiled at the same time as the Parkway opens. We spend 2023 under construction and then it’s done, so the community only has to go through it once.”

Clark acknowledges that the schedule will require an “ambitious” effort from city and TART Trails consultants and staff to gather feedback from all of the various city agencies on expanding the trail, finalizing design and construction plans, securing funds and property easements from Groups like NMC and Delamar to widen the track on their properties. Winter and Clark say they have already had positive discussions with these property owners and are gathering information on their design requirements, although easement agreements have not yet been finalized.

In a phone call with The Ticker on the Boardman Lake Trail loop — another project that required aggressive regional collaboration to complete — Clark says she’s “optimistic” that the TART Trail expansion will go in conjunction with the reconstruction of the Grandview Parkway can be done when local partners are on board. “We think we can do it,” she says. “We’ve carved out our work for ourselves for the next six to 12 months, but the first step is figuring out what the community wants? If this is embraced by the community and identified as a priority… and there is a coordinated effort between all partners, it can happen.”