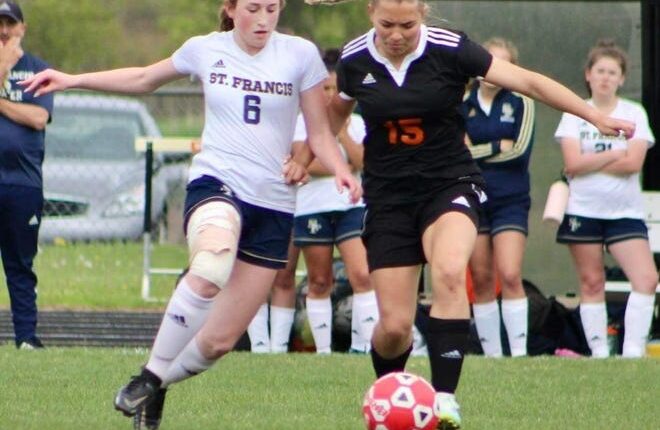 CHEBOYGAN – Tom Markham has enjoyed coaching his current Cheboygan girls soccer team as much as any group he’s coached in the past.

Unfortunately for Markham and the Chiefs, one really good thing came to an end on Thursday.

The Chiefs saw their campaign end after suffering a narrow 1-0 defeat to Traverse City St. Francis in a hard-fought Division 3 district first-round clash at Cheboygan.

“We’ve been a family for a long time,” said Markham, whose squad finished 13-5-1 overall. “The variety of talent and effort. This season we had a variety of kids scoring some key goals for us. I can look back on so many different games where a different kid stepped it up and made the difference, and so it wasn’t any one individual but the fact that we were all playing together towards the same goal, which I think was pretty special .”

The Gladiators took the lead on a goal from a direct kick in the first half, but the Chiefs continued to pressure and create scoring opportunities. However, Cheboygan’s biggest chance of the first half – a powerful volley from junior forward Cassidy Jewell – was saved by the Gladiators, who held onto their one-goal advantage going into the break.

Despite generating some opportunities in the second half, the Chiefs were never able to break the resistance of a stout and well-organized TC St. Francis defense.

(TCSF’s goalkeeper) made an outstanding stop right before halftime,” Markham said. “Kenzie Burt served a nice ball to Cassidy (Jewell), who volleyed it, but their goalkeeper made a nice one-handed save. Their back four was really stingy defensively.

“Both teams played a hard-fought game. Their team played tough, we played tough, and we were really pressing hard for a goal in the second half.

“One of the things I’m proud of is my team left everything on the field.”

Thursday marked the end of another solid spring for the Chiefs, who won the Northern Michigan Soccer League East Division title with a 12-1-1 clip.

“I’m very pleased with the season we had, I’m very proud, but this is tough,” Markham said. “My daughter (Elizabeth) is a senior. We graduate seven really solid individuals, most of whom have been playing with me since they were in the fifth grade. It was really tough, but they have got every reason to be proud of this season. We won some tough games. I told them the same thing: ‘Sometimes it’s your night and sometimes it’s their night.

“Kudos to St. Francis, we wish you luck.”

Markham also touched on his senior class, which includes his daughter, Elizabeth, as well as many other talented players.

“Camille Aper played her heart out this year. Elizabeth Harke. I mean. just all of them had no quit,” Markham said. “I think that’s the big distinguishing thing is that these kids just have heart, and I think that makes a big difference. The bottom line is we had a bunch of kids that were willing to work hard and put the team above themselves. I think that’s pretty special when you have a situation like that.”

While it’ll be a long wait until next season, the Chiefs have a bright future, especially with the returns of Burt and Jewell, two standout attackers who will be seniors in 2023. Cheboygan will also bring it plenty of talent from its junior varsity squad, which also showed positive signs in its campaign.

“Coach (Seth) Duncan and I were very pleased with our JV team, we’ve got some kids that are going to be here next year that I think are going to help us considerably,” Markham said. We’ve got that mentality of we’ve gotta get to work for next season. We’ve gotta get ready for next season. I’m excited about that, as always, but right now we’re really just going to try and celebrate the great accomplishments this year and, in particular, wish our seniors well.”

Ruling on Michigan abortion ban is of ‘paramount importance’ ⋆

A man suffered serious injuries in Lansing after a machete attack stemming from a parking dispute, police say – Chicago Tribune