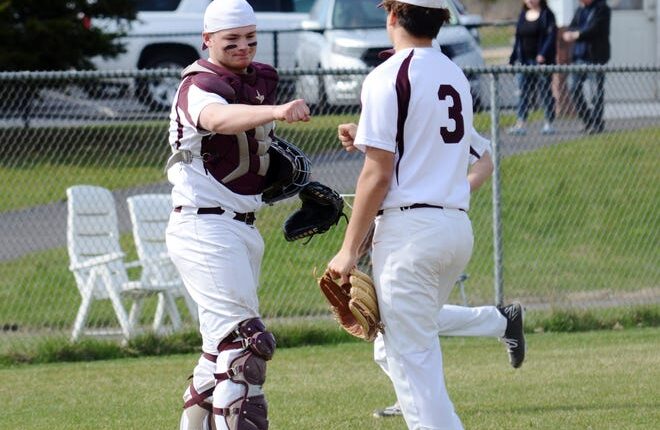 TRAVERSE CITY — If their hot start to the season didn’t have the Charlevoix baseball team playing with confidence with every at-bat and pitch heading into Monday, they certainly will now.

For the first time this season, the Traverse City St. Francis baseball team went down in a Lake Michigan Conference sweep, which came at the hands of Charlevoix Monday.

The Rayders earned a 3-2 win in the opener behind a pair of 12-strikeout performances on the mound, then racked up 13 hits in game two to deliver the sweep with a 10-4 victory.

The wins helped move Charlevoix to 10-2 overall on the season.

In the opener, Charlevoix trailed 2-1 most of the night, until the top of the sixth when they plated two runs, tying the game on a double by Caleb Stuck, then Jack Jarema scored stuck on a single to bring in the eventual game -winning run.

Charlevoix pitcher Bryce Johnson kept his standout season going on the hill with 5.1 innings of work, in which he allowed just two hits and five walks. He also struck out 12 batters.

Owen Waha then came out for a two-out save in the sixth, striking out one with one hit allowed.

Along with Stuck and Jarema, Troy Nickel and Josh House each singled.

Game two came with the Rayders grabbing the lead early after two innings, leading 5-1, then another three runs in the fourth gave Charlevoix some cushion to roll with.

Ryan Pearl led with a double, two singles and two RBIs, Stuck singled, doubled, had one RBI and scored four runs, House doubled in a run and Jarema singled twice and had two RBIs.

After pitching in relief in the opener, Waha got the start and went five innings with eight hits and issued a walk, while also striking out four batters. Sterrett then pitched a clean sixth, striking out one.

KALKASKA — Boyne City baseball earned a Lake Michigan Conference sweep Monday, leaning on a no-hitter from senior Aaron Bess on the mound in game one.

Bess came a walk away from a perfect game after six innings of work in the opener, while striking out 14 batters.

Riley Dittmar led with a single and double and two BRIs, Wyatt Stinger singled in a run and Bess had an RBI as well.

In the nightcap, Kaden Jewett earned the start and pitched a solid performance with two hits and four walks issued, while also striking out seven.

Dittmar added another double and drove in two runs, Nolan Little singled and doubled and had two RBIs, Stinger singled twice and Bess had another RBI.

The sweep moved Boyne City to 11-8 overall on the season.

“It was a pair of gritty games,” East Jordan coach Tom Reid said. “We hit so many balls hard that they made phenomenal plays on or they were directly at them. If half of those drop, we sweep instead of split. Sometimes you just tip your cap and accept it.”

Tommy Reid struck out 12 batters and allowed just one hit in game one for East Jordan, while adding two singles at the plate.

Ben Reid and Kaleb Schroeder also each had two hits and Hayden Peck had a pair of RBIs.

The Red Devils then had just four hits in game two, led by Peck with an RBI single.

Schroeder then took the loss, pitching a complete game with six hits and four walks allowed, striking out one.

ELK RAPIDS — East Jordan softball will still be looking for its first win of the season after visiting Elk Rapids and dropping a pair Monday.

East Jordan had just two hits in game one, off the bats of Sophie Snyder and Alley Whiteford, while Snyder took the loss with 11 hits and three walks allowed. She also struck out five.

In game two, a 7-3 loss, June Kirkpatrick doubled, Lillian Stone singled in a pair of runs and Avary Wilson and Whiteford each singled.

BOYNE FALLS — The Boyne City boys’ golf team hosted for the first time this season at Boyne Mountain’s Alpine course, where Elk Rapids took the top spot with a 337.

Boyne City then earned runner-up with a 350, Charlevoix was third with a 361, Harbor Springs placed seventh at 413 and East Jordan shot 515 for ninth place.

Individually, Joshua Lavely of Elk Rapids was first with a 76, while Alex Kaems of Tawas placed second with an 80.

Ryan Reynolds and Nic Santina of Boyne City also tied for ninth place with an 88 and Charlevoix’s Joshua Schultz came in a stroke behind with an 89.

Donovan Sylvain then led for Harbor Springs with a 92.

TRAVERSE CITY — The Boyne City and Traverse City St. Francis soccer teams couldn’t settle things during a rematch Monday in TC, with the two playing to a 0-0 tie.

Maggi McHugh and Mya Pofahl each made three saves in the shutout, while Boyne City had six shot on goal.

The Ramblers moved to 5-5-2 overall and 4-2-2 in the Lake Michigan Conference and next head to Charlevoix on Tuesday, May 17.