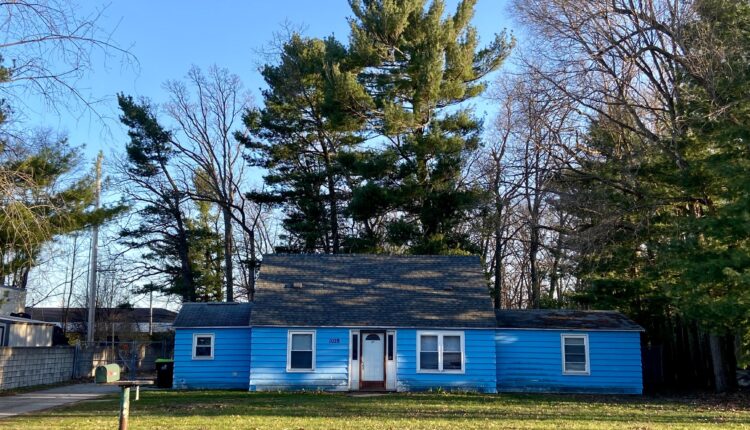 The Grand Traverse County Brownfield Redevelopment Authority (BRA) approved just over $175,000 in grant funding Thursday for a HomeStretch development that will bring 10 new rental apartments to Carver Street. The apartments will be tied to specific tenant income levels for at least 20 years, though HomeStretch Executive Director Jon Stimson said the goal is to keep them that way in perpetuity, noting his organization has never converted any of its apartments to market-rate units since launched in 1996.

BRA board members approved a grant totaling $175,431 for the HomeStretch project located at 1028 Carver Street. The site currently houses a single-family home built in 1947 (pictured) that is “functionally obsolete,” making it eligible for brownfield funding, according to BRA Director Anne Jamieson-Urena. An inspection revealed “multiple repairs and safety upgrades that are financially not feasible for the home to be habitable,” according to HomeStretch’s application. “Infestation of rodents and previous animal/pets in residence have left a foul odor on the interior. Weatherization efforts are not deemed appropriate. Neighborhood sentiment considers the property to be a blight on the community. The proposed project will remove the dwelling in its entirety and replace it with a professional, architecturally pleasing development while enhancing the surrounding property values ​​and promote revitalization and stability.”

The BRA grant – which will cover activities like demolition, site preparation, curbs and gutters, sidewalks, and stormwater infrastructure – will help close an existing funding gap of just over $600,000 for the project, which has a total development price tag of $2.5 million, according to Stimson. He said a variety of other funding sources have been applied to the project, including the Grand Traverse County Land Bank Authority donating half the property value and the Michigan State Housing Development Authority contributing another $600,000. “This site has been in the works for the past couple years,” Stimson said, adding that “everything’s predicated on raising funds” and that the BRA grant brings HomeStretch “one step closer” to covering the gap. Stimson said the project is “shovel-ready” once the remaining funds are secured.

County Commissioner Ron Clous, who sits on the BRA board, was the sole ‘no’ vote against the project. Though he didn’t explain his opposition, Clous questioned Stimson about how long the apartments would remain income-restricted. Stimson said the answer was at least 20 years under agreement terms, though he noted HomeStretch has “never converted (units) to market rate” since launching in 1996 and would plan to keep Carver Street income-restricted in perpetuity. “We’re in it for the long haul,” he said. HomeStretch has other similar housing projects underway across the region, including Oakwood Townhomes on East Eighth Street, the Depot Neighborhood near the intersection of Eighth and Woodmere, and Honor Village Apartments.

HomeStretch said it would strive to have the project – which is near the Garfield Avenue intersection across from DeWeese Hardware on Carver – serve as a “buffer between commercial and residential use” in the neighborhood, softening the commercial impact on residents. The organization also plans to use an energy-efficient design, utilizing Structural Insulated Panels (SIPS) from Holland, Michigan, for the exterior building envelope. “The foundation system is a shallow, super insulated frost wall and insulated concrete slab on the lower level,” according to HomeStretch. “By achieving less than two air exchanges per hour and utilizing a super insulated building envelope and design, utility costs will be reduced.” Converting the project from gas to all electric is also “possible during the life of the building,” HomeStretch stated.

According to HomeStretch, “the new buildings are architecturally correct for the neighborhood and will be “replacing a blighted structure with a new low profile fronted structure, aligning with current setbacks and new infrastructure.” The nonprofit added that the “injection of additional residents increases the employee base, school attendance, local spending, much needed affordable housing, and overall increases economic development.” With close proximity to Traverse Heights, the Garfield Avenue corridor, and downtown Traverse City, the new apartment complex will allow “10 households to meet most of their needs by walking and biking, thus reducing the strain on the transportation and street grid and helping alleviate congestion,” according to HomeStretch.

All eyes on East Lansing