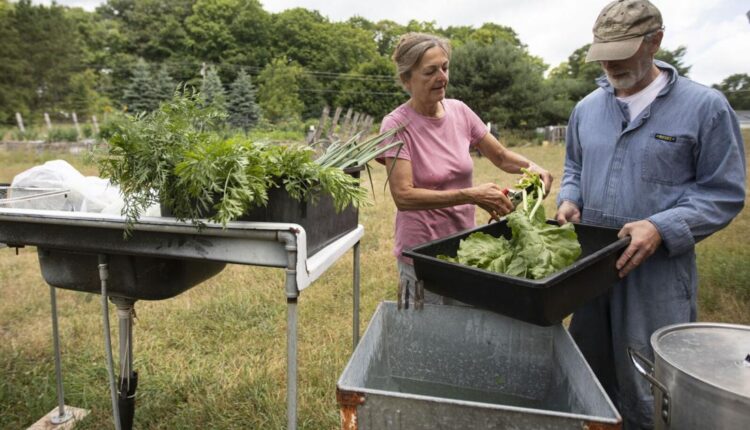 TRAVERSE CITY — A historic family farm in Long Lake Township rises out of time to become a modern homestead.

Pasture pigs and free-range chickens live their best lives on Boone farm, while owners and visitors lean into harmony with the land.

Descendent of the farm founder, Vince Ryan and wife Irene Hogan, gave up big city life in 2014 to purchase the property. They adopted the simplicity of past farming methods guided by a desire to live and work ethically.

Ryan’s childhood was spent primarily in southern California, but he visited the farm every summer. For many years, Ryan and Hogan lived the San Francisco lifestyle.

“At 40, I paused,” Ryan said. “I had made the western dream come true and made a lot of money. But it doesn’t bring happiness.”

When Grandma Boone’s farm initially came on the market the price was out of reach for the couple. Three years later luck was on their side and their lower offer was accepted. The couple stepped into the shoes of previous generations to carry on the family legacy.

Boone Farm, built about 1900 by Wilhelmina Fisher Weiselberg, originally occupied 116 acres along what is known today as Boone Road. Unlike most properties of earlier eras, the farm was passed down through daughters rather than sons, with the exception of the second owner, Herman Weiselberg.

Eldest son of the fourth owner, James Daniel Boone, was the last individual born on the farm. Boone, 84, lives at Grawn. He continues to make pilgrimages to the farm to share his expertise with the novices.

“We were a couple of city slickers learning how to homestead,” Ryan said. “We just jumped in.”

Ryan and Hogan focused on improving the infrastructure during the first five years at the farm. The home and barn were restored, chicken coops and a small sawmill were built and utilities upgraded. Hogs, chickens and gardens brought new life to the plan.

The sum of their homesteading efforts reflects the couple’s deep held philosophy.

“Life is about birth and death,” Ryan said. “How do we integrate it into our life so we can become whole?”

Life at the homestead centers on ethically raising 60 chickens, and the humane breeding of hogs, Boris and Hot Tamale and raising their piglets.

“Local community members can come and choose their pig,” Hogan said. “If desired, they can continue to visit it as we raise it. This provides the opportunity for one’s peace of mind that the pigs live an extremely happy and joyful life.”

The homestead throughout the years produced potatoes, corn, red rye, hay and cherries. The contemporary operation uses a centuries-old method to grow vegetables. Wooden 4-by-3-foot raised beds are filled two-thirds with logs harvested on the property, topped with soil. Logs break down to build rich soil resulting in healthy crops.

Food produced on the farm not only sustains the couple year-round, it supports Ryan’s parents and tenants also living on the property. The arrangement provides many hands for pitching in on farm chores — and opportunities to relish country life.

From the farm’s roadside stood to the shores of Bass Lake, much of the homestead’s 61 acres remains untouched. The hardwoods and pine woodlands, meadows, and wetlands preserved microbiome contributes to vigorous ecosystems, while Ryan and Hogan’s light environmental footprint sustains family and Grand Traverse heritage.