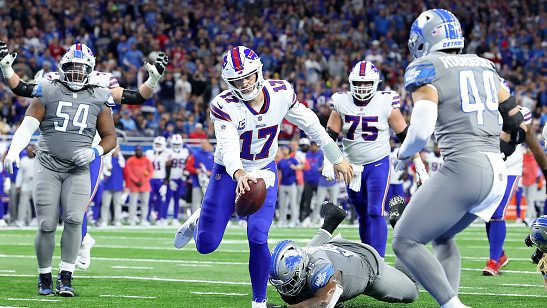 Bills up 17-14 at halftime in Detroit

The Bills are winning at halftime in Detroit after a last second field goal, but they aren’t all smiles in the locker room.

Von Miller was carted to the locker room and ruled out with a knee injury late in the first half of the game, which will make it tougher for the Bills to hold onto the 17-14 lead they took on Tyler Bass’ 47-yard field goal as time expired. Edge rushers Greg Rousseau and AJ Epenesa are both inactive, so the team doesn’t have much firepower off the edge for the rest of the game.

Miller’s injury came during a long Lions drive that ended with Jared Goff throwing a one-yard touchdown to wide receiver Amon-Ra St. Brown on a fourth down. It was the third time that the Lions went for it on fourth down in the first half and they converted all three of them.

Goff is 12-of-19 for 124 yards and St. Brown has caught four passes for 34 yards. Running back Jamaal Williams scored the other touchdown, but he also lost a fumble that led to the Bills’ second touchdown of the first half.

Josh Allen ran for that score and he also hit wide receiver Isaiah McKenzie for a touchdown in the first quarter. He drove the Bills to the Lions’ 20 in the final seconds, but a sack by James Houston forced the team to settle for the Bass field goal.