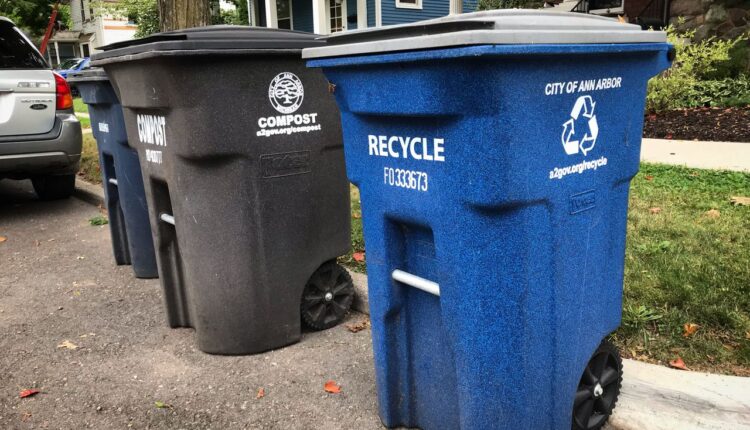 ANN ARBOR, MI – A proposal to reduce the weekly garbage collection in Ann Arbor to every other week could be directed towards the trash can, or perhaps a trash can.

The idea was recently publicized at a meeting of the Environment Commission and passed on at a city council meeting by Councilor Lisa Disch, D-1st Ward. She doesn’t have a lot of political support. Mayor Christopher Taylor and other council members distanced themselves from it over the past week.

“I want to improve basic services and improve the quality of life,” said Taylor. “I do not support the reduction of solid waste services.”

When council member Ali Ramlawi, D-5th Ward, publicly replied to emails from local residents, he made it clear at the council meeting on March 15 that he did not support the idea either.

“I just want to say that I am not part of any of the conversations that are being had about reducing the frequency of the solid waste collection service,” he said, adding that those conversations are on a commission level and he is not. I do not think there is any interest in the Council in that.

The idea that came up at a recent Environment Commission meeting was that city officials should investigate the possibility of switching to garbage collection every two weeks to divert waste from landfill sites and reduce greenhouse gases from landfill sites and collection vehicles. Before such a shift could take place in the future, the city would need to do more to get residents and businesses to recycle, compost and reduce waste, Disch said.

“I would like to repeat the position of Councilor Ramlawi that there is currently no proposal for a vote in the Council on reducing the frequency of garbage collection,” said Disch.

“There is a draft proposal for the council to ask staff to conduct a study. That is very, very far from a service cut. “

The draft proposal is part of a wider discussion on waste reduction, and it could end up looking very different if it is ever accepted on the council, Disch said.

Disch has seen a lot of Ann Arborites become more interested in composting and recycling in the past few days, and she agrees that Ramlawi cutting down garbage collection to every other week is not a good way to encourage them to do so, she said.

The Environment Commission’s focus is on waste reduction and how local residents and businesses can make more robust use of composting and recycling services to reduce the amount of trash they landfill, Disch said.

Those interested in joining the conversation about the relationship between Ann Arbor’s carbon neutrality goals and solid waste can tune in to an A2Zero panel discussion on waste reduction from March 31 to 6:00 p.m., Disch said.

Councilor Linh Song, D-2nd Ward, said the topic of trash was a new interest for her and she thanked the city’s environmental commissioners who are considering the potential to treat trash differently and reduce waste.

“So this will be exciting in a few years, maybe with community involvement,” she said.

Other council members expressed their doubts about the idea of ​​reducing garbage collection or even investigating it now.

It’s premature to have a community talk and instead the city should focus on ways to reduce waste, said Councilor Erica Briggs, D-5th Ward.

“I don’t see how this works in Ann Arbor without significantly increasing the other waste disposal options,” said Councilor Elizabeth Nelson, D-4th Ward.

“I haven’t seen any details about what these possibilities might look like, not enough to know how plausible they would be to the average resident,” she said. “My own household composts and recycles as carefully as possible, but this reduction in service would be difficult for us.”

If the taxes that Ann Arbor owners pay on solid waste disposal were lowered, that could be considered, said Councilor Jeff Hayner, D-1st Ward.

“Otherwise, I suspect that most residents rightly see this as an unnecessary reduction in services,” he said.

The conversation needs to shift to year-round composting and extending other waste reduction strategies like composting and recycling to all residents and businesses, said Councilor Julie Grand, D-3rd Ward.

While everyone should strive to reduce the amount of junk they produce, reducing services is not currently the best way to achieve that goal, said Councilor Travis Radina, D-3rd Ward.

“I am currently not supporting efforts to reduce roadside garbage service to every other week,” he said. “While I am grateful for this conversation in the community about waste reduction, I think we should develop strategies to better educate the community about their composting and recycling options and to expand our roadside compost collection year round.”

Solid waste accounts for around 3% of the community’s carbon emissions, according to the city’s A2Zero plan, which sets the goal of making the entire community climate neutral by 2030.

Extending the time between garbage collection is one of several ideas to cut down on landfill garbage mentioned as future considerations in the A2Zero plan.

“We’re not ready to think about garbage collection every other week, but it’s a sensible goal,” said Councilor Kathy Griswold, D-2nd Ward.

First, the city needs to provide full information on what can be composted and recycled and expand roadside compost collection to 10 to 11 months a year, she said.

According to Griswold, one voter proposed a compromise to reduce garbage collection: every two weeks garbage trucks drive down one side of the street, and residents are allowed to park their garbage trucks on the opposite side as needed.

“If our goals are to reduce waste volume and emissions, we need to be clear about this to the public and see if the savings are worth the public deterioration and confusion,” Griswold said, adding she thinks so The public continues to discuss time “will only increase resistance to a possible idea in the future.”

Ann Arbor City employees received $ 63.7 million last year. See who did the most

COVID-19 shut it down, but this Ann Arbor nonprofit was still handing on