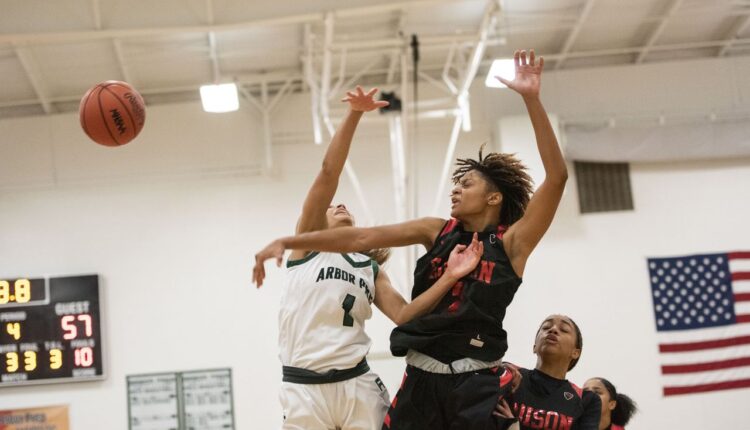 The McDonald’s All-American showed off more than her scoring ability as she did it all for Division 2 No. 1 Detroit Edison in the final minutes to lift the Pioneers to a 60-52 victory over D3 No. 1 Ypsilanti Arbor Prep.

With the game tied at 52 with 1:55 left in the fourth quarter, Whitehorn recorded a steal and layup to give Edison the 54-52 lead.

The 5-star Clemson commit wasn’t done there as she then grabbed a key rebound and converted an and-one to push DEPSA ahead 57-52 with 1:07 left to play and then blocked a shot on the defensive end to seal the win.

“That’s just who she is,” said DEPSA head coach Monique Brown of Whitehorn. “When the game is on the line, she’s willing to take over but she’s willing to do it outside of just scoring points.”

Whitehorn’s late-game heroics helped the Pioneers bounce back from their first loss to a Michigan team since 2018 – which ended a 74-game win streak – to West Bloomfield on Tuesday, helping the team regain its morale.

Whitehorn finished the game with 24 points, followed by 11 from Madisen Wardell.

“After that loss our team took a hit in our confidence and it kind of shook us up a little bit,” Whitehorn said. “So, it was really good to see everybody being involved. They gave me energy and I appreciate my teammates for that, so I really didn’t want to let them down.”

Until DEPSA’s 8-0 run to close out the game, Arbor Prep made several runs to battle back into the game.

But the Gators were unable to find the offense down the stretch as they recorded several turnovers and missed key free throws as they fell to 14-2 on the season.

“When I think back on the game, I’m really shocked that we were in the game 52-52 with a couple minutes left because offensively we didn’t play with any poise, confidence or composure,” said Arbor Prep head coach Scott stine “We lost the game because we couldn’t take care of the ball.

“I would say I was a little surprised. I would have expected we would have handled the pressure a little bit better.”

The Gators were led by 4-star Texas A&M recruit Mya Petticord, who finished with 17 points, while Jazmin Chupp and Stephanie Utomi each added eight points.

Even with the loss, Stine said his team’s fight to get back into the game late displayed how good the Gators can be minus the mistakes.

“It shows what we already know, we are extremely talented,” he said. “Because I don’t believe that we can play any worse and we were back at 52-52 with a couple minutes left. We didn’t make winning plays.”

Arbor Prep will have a chance to get back to their winning ways Saturday against Holt.

As for DEPSA, the Pioneers embraced the pressure of playing two No. 1-ranked teams this week in a season that has been filled with starts and stoppages resulting in the team playing only 11 games so far.

But despite the circumstances, playing against top-level competition is what Brown believes will help her team when the postseason comes around as the Pioneers attempt to regain the D2 state title after having its past two postseasons end due to COIVD-19 issues.

“One of the main things is we’re able to play games,” she said. “It’s been crazy. But the one thing I can say is we still live to fight another day. We put the past behind us and we’re just going to look to the future and do what we can do.”