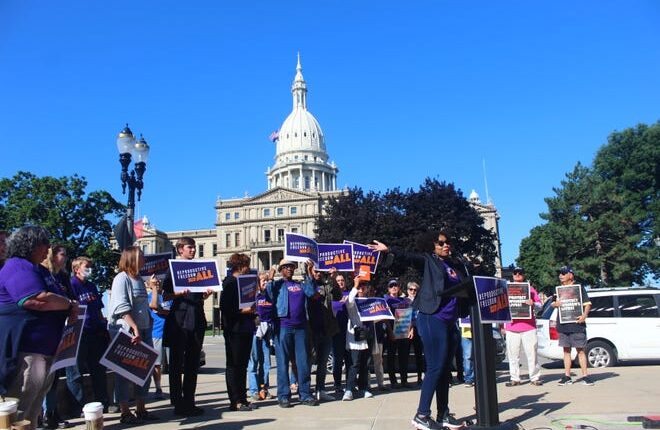 Liz Buckner traveled an hour to Lansing to share her experience with two nonviable pregnancies in the early 1990s at a rally for abortion rights.

She said she is passionate about a movement that would keep alive women’s right to abortions in Michigan, and the Farmington resident’s decision to attend Wednesday’s rally happened on the same day the courts struck down as unconstitutional the state’s 1931 law that criminalized most abortions.

Buckner and Beata Lamparski of Beverly Hills each obtained around 5,000 signatures from Alcona, Cheboygan and Marquette counties before joining at least 50 ralliers Wednesday morning at Lansing City Hall to urge the Michigan Supreme Court to add Reproductive Freedom for All’s abortion proposal on November ballots.

Those in attendance held banners and stood in solidarity with one another. There were no obvious signs of counter-protesters.

“I don’t want any person to be making these decisions about a pregnancy or motherhood when also worrying about whether or not they’re going to go to jail,” Lamparksi, who also had a nonviable pregnancy, said.

The state Board of Canvassers deadlocked on an effort on Aug. 31 to add Reproductive Freedom For All’s ballot question. Volunteers collected nearly 600,000 signatures for the question, above the 425,000-minimum requirement.

The Michigan Supreme Court is expected to decide soon on the issue.

Reproductive Freedom for All’s website indicates the group’s fight is so “every person has the fundamental right to reproductive freedom, which involves the right to make and carry out decisions without political interference about all matters relating to pregnancy, including birth control, abortion, prenatal care , and childbirth.”

The group’s measure is also intended to ensure the rights to respectful care during birthing, temporary or permanent birth control and the right to continue or end a pregnancy pre-viability. No one would be punished for having a miscarriage, stillbirth, or abortion.

On Wednesday, Michigan Attorney General Dana Nessel said she filed an amicus brief in support of the effort.

“The Board of Canvassers, a ministerial body without any legal powers or judgment of its own, effectively usurped the Legislature’s authority by refusing to approve the petition, ostensibly because two of the Board’s members thought the word spacing was insufficient,” she said in a statements.

She said that if the court doesn’t require the board to add the proposal to the ballot, it would create “the most dangerous precedent” she could imagine as partisan appointees can decide to not add a ballot proposal if they don’t want voters to see it.

“Either because they don’t want the ballot proposal to pass or they don’t like the fact that it’s likely that it will generate increased turnout,” she said.

Nicole Wells Stallworth, executive director of Planned Parenthood Advocates of Michigan, said the organization has provided sexual and reproductive healthcare to people throughout the state. Planned Parenthood and other human rights organizations created the ballot question after the US Supreme Court memo leaked last March to codify abortion rights.

They joined Reproductive Freedom for All’s lawsuit against the board for voters to decide on the proposal.