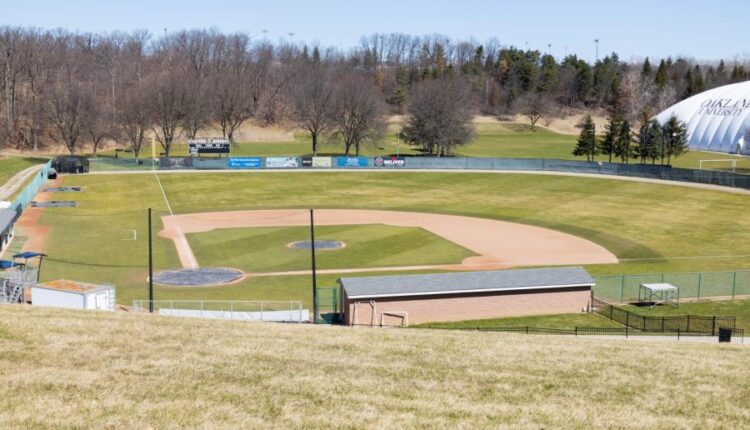 The Oakland baseball team took the diamond on Sunday against Lansing Community College for the first time since last season. The Golden Grizzlies put together an offensive masterpiece in a 19-4 beatdown of the Stars.

Coming off an impressive 31 wins last season, head coach Jordon Banfield and the Golden Grizzlies are looking to add to last year’s historic season. It all starts in the fall, and Oakland began its quest for greatness on Sunday.

Brandon Heidal and Brandon Nigh led the way for the Golden Grizzlies, as the two combined for half of the team’s hits. The junior and sophomore, respectively, each went 3-5.

Heidal also recorded two hits by pitches as he reached base in five of his six at bats.

Nigh picked up right where he left off from last season. As a true freshman last year, he finished near the top of almost every hitting statistic.

After batting .327 with a 1,038 OPS and driving in 32 runs in his freshman campaign, he received high praise not only from his teammates and coaches, but also from the Horizon League when they named him their Freshman of the Year back in May.

The now sophomore didn’t lose a step over the offseason. In Sunday’s game, he hit a home run, a triple and a double, and finished just a single shy of hitting for the cycle.

He finished with a stunning eight RBIs, and he crossed the plate three times as well, accounting for 11 of Oakland’s 19 runs.

Redshirt sophomore Reagan Paulina also showed out for the Golden Grizzlies. Paulina finished the game 2-2 with a home run and two walks. He also stole a base, scored three runs and drove in two, as well.

As for pitching, Brandon Decker and Jake Matthaidess juniors each recorded multiple strikeouts, and showed a lot of promise on the mound for the Golden Grizzlies.

The Stars struck right away in the top of the first with a deep home run, but Oakland answered with four runs of its own in the home half of the inning and never looked back.

Lansing Community failed to score for the next nine innings, in what turned out to be a friendly 12-inning game.

Oakland will enjoy a lengthy break before it crosses the Michigan-Ohio border on Oct. 16 to take on the Toledo Rockets in the second game of its fall schedule.

The 2023 schedule is yet to be finalized for Oakland. Getting the opportunity to play friendly games in the fall will not only help the returning starters, but it also serves as an opportunity to get the younger players some more experience as they try and perfect their crafts in hopes of one day starting on the team.