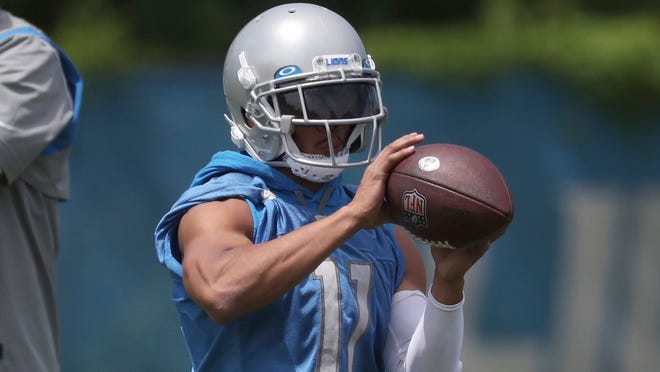 WR room ‘appears to be like really good right now’

The Detroit Lions had no trouble fitting Josh Reynolds into their offense as a midseason addition last year, but new offensive coordinator Ben Johnson said that could be a little trickier to do this season with rookie receiver Jameson Williams.

“It’s going to be a challenge cause you can’t really compare it to the Josh Reynolds situation from last year, which I would love to do because he came in late and he had to learn, and we didn’t really know him and what he necessarily did best,” Johnson said. “But at least there was a comfort level between him and the quarterback, and we don’t have that.”

Reynolds caught 19 passes for 306 yards in seven games with the Lions last season after they claimed him off waivers from the Tennessee Titans in early November.

ON OFFENSE:Lions’ Dan Campbell ‘going to trust my gut’ about offensive play-calling

The Lions were struggling offensively at the time and shorthanded at receiver after losing Tyrell Williams to a brain injury; Reynolds played his first four seasons with Lions quarterback Jared Goff with the Los Angeles Rams.

Williams was considered one of the top receivers in this year’s draft, but he is not practicing with the team as he recovers from a torn ACL he suffered in January.

Lions general manager Brad Holmes has pledged to take things slowly with Williams’ rehab, and the Lions will have a decision to make this summer on how best to get Williams up to speed.

If Williams starts the season on the physically unable to perform list, he must miss at least the first six games and will not be able to practice with the team until October.

If he starts the season on the active roster with no intention of playing in early games, the Lions would be short one player to start the year.

“That’s a real struggle for us is to get him back, to get him healthy, and then (get him) as many reps as possible with the quarterbacks so that we know exactly where he’s going to be, we can anticipate the throw,” Johnson said. “That’s the one thing that (Goff had) naturally with Josh coming from their days in LA, so yeah, it may take a little bit of time.

“I think we have a good vision for how we want to use him, though, and right now our biggest issue with him, we just, the mental. We got to continue to load him up and let this thing sink in.”

Johnson praised Williams’ approach to practice during Organized Team Activities. Williams has carried around a play sheet to follow the practice plan during both of the Lions’ open workouts, and Johnson said he’s been “engaged in each meeting, so it’s good to see.”

The Lions have a more experienced receiving corps than last season, with Reynolds, Amon-Ra St. Brown and free agent addition DJ Chark as their top pass catchers, and Kalif Raymond and Quintez Cephus among those coming off the bench.

Johnson said he likes the way the Lions receivers complement each other with their size and speed.

“We got smart players,” he said. “Really, across the board we have smart players, which once again we talk about the verbiage and all that. The system. That’s necessary. We’ve got to have smart players if we’re going to be able to attack defenses the way we’re lookin to attack them. That room looks really good right now. If we just continue to stay healthy and push each other along and the sky’s the limit.”