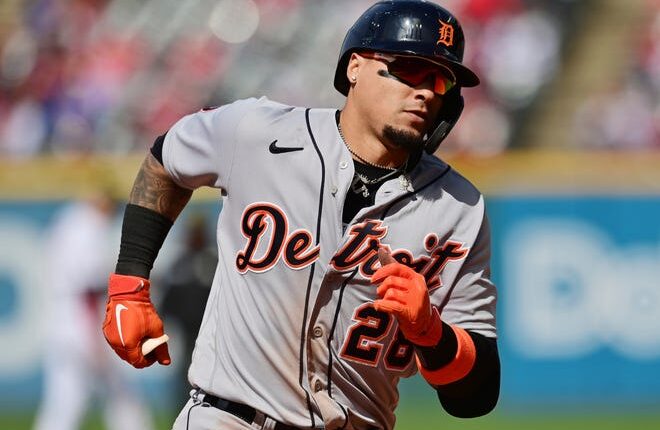 Why the Detroit Tigers are benching Javier Baez again

For the second game in a row, Detroit Tigers manager AJ Hinch didn’t include shortstop Javier Báez — who signed a six-year, $140 million contract this past offseason — in the starting lineup.

Hinch turned to Harold Castro as the starting shortstop for Thursday’s series finale against the Minnesota Twins at Comerica Park. Báez will return to the lineup Friday against the Yankees in New York.

“He’s doing fine,” Hinch said Thursday. “This actually came up during the game yesterday, just talking on the bench. Sometimes, watching the game is good, and also when you got Harold playing the way he is, it’s pretty convenient to give Javy a couple days to reset physically, reset mentally and just watch his teammates play.”

Castro, a utility player, has outperformed Báez this season, hitting .315 with four home runs in 30 games. He has a .435 batting average with three homers in his past six games.

“When you stop having fun offensively, it makes for a very difficult game. He’ll bounce back. He’s had tough stretches before, bounced back and had incredible years. There’s a lot of at-bats left. For today’s game, giving him another day is pretty easy because of what Harold is doing.”

The Tigers have shifted gears with left-hander Tyler Alexander.

Alexander, returning from a left elbow sprain that sent him to the injured list May 2, originally planned to join the Tigers as a starting pitcher, but the Tigers are now ramping him up as a multi-inning reliever.

“Watching the video the other day,” Hinch said, “(pitching coach Chris Fetter) and I were talking about how getting him more game action is probably going to be more important than stretching him out to 60 or 70 pitches.”

Alexander, 27, will throw two innings Saturday for Triple-A Toledo, then another two innings Tuesday. The Tigers could ask him to pitch back-to-back games, which would mean another outing Wednesday.

The Tigers hope to make a decision about Alexander’s status by June 10, when the club returns to Comerica Park for the beginning of a 10-game homestand against the Toronto Blue Jays, Chicago White Sox and Texas Rangers.

Left-hander Eduardo Rodriguez is lined up to begin his rehab assignment next week in Triple-A Toledo. He has been on the injured list since May 22 with a left ribcage sprain.

The 29-year-old threw off the mound once already and he is expected to throw off the mound again at Yankee Stadium. If Rodriguez avoids any setbacks, he will pitch three or four innings for the Mud Hens next week.

“We don’t have to worry about slotting them in until they’re healthy,” Hinch said. “Eduardo looks like he’s going to be the first back on the mound. … He hasn’t missed a ton of time, and strength-wise, he’s still really good.”

The Tigers signed Rodriguez to a five-year, $77 million contract in November. He has a 4.38 ERA with 17 walks and 34 strikeouts across 39 innings in eight starts this season.

Outfielder Austin Meadows, symptom-free after a lengthy stint with vertigo, completed his first rehab assignment game Wednesday for Triple-A Toledo. He finished 0-for-3 and was replaced by pinch-hitter Jacob Robson in the seventh inning.

“Getting back into baseball was a little funny for him, just because he hadn’t done hardly anything for a couple weeks in game action,” Hinch said. “He felt really good, and he said, ‘See you soon.’ That’s a good sign.”

The Tigers placed Meadows on the injured list May 16.

• Infield prospect Ryan Kreidler returned from a fractured right hand May 27 for Triple-A Toledo, but he hasn’t played since May 29 due to soreness. The Tigers decided to give him a couple days to rest. In his two games, the 24-year-old is 2-for-9 with one double and three strikeouts.

“When he got back into games, he popped up with some soreness,” Hinch said. “There’s nothing to re-injure. It’s fixed. But the hand strength, the bouncing back after all the swings, the game action all bothered him a little bit as expected.”

• Outfielder Riley Greene, in his second rehab game for the Mud Hens, exited Wednesday after striking out swinging in the seventh inning. The 21-year-old finished 0-for-3 with one walk and one strikeout. He is scheduled to play Friday for Toledo. It will be his fifth game since returning from a fractured right foot.

Despite a First-Ever ‘Right-to-Repair’ Law, There’s No Easy Fix for Wheelchair Users