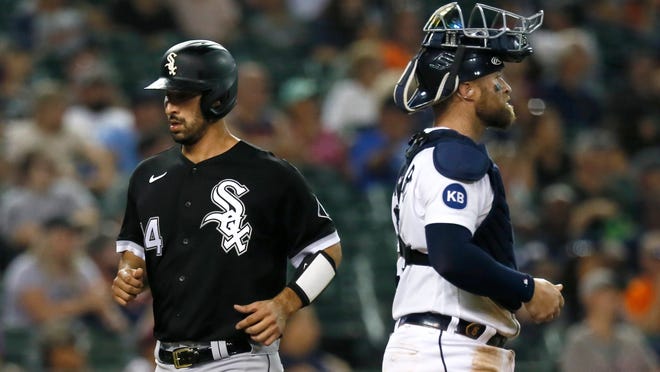 Why Detroit Tigers are shutting down Beau Brieske

Detroit Tigers right-hander Beau Brieske is healthy. But he isn’t going to pitch again in 2022.

The Tigers, after several internal discussions, have decided to shut down Brieske for the remainder of the season. The 24-year-old, who made 15 starts and posted a 4.19 ERA as a rookie this season, has been on the injured list since the All-Star break.

“There’s a little bit of a scratch your head like, ‘What are we doing?’ Let’s just call it a successful year for him,” manager AJ Hinch said. “We got him back in form. The next step was to ramp him up, and there’s not much to gain by doing that for one outing.”

Instead of beginning a rehab assignment, Brieske is leaving the Tigers and will travel to his home in Arizona. He is looking forward to spending time with his family, but more so than that, he is eager to start his offseason throwing program.

Brieske, sidelined with right biceps tendinitis, would have needed at least one start at Triple-A Toledo before returning to the big leagues for his final start of the year. The Tigers, considering all the injuries this season, didn’t want to put one of their promising young pitchers at risk of a re-injury.

“He made it to the big leagues,” Hinch said. “He was effective. He’s a very promising pitcher. I think we’re done testing the medical fate of guys coming back.”

Brieske started the season in mid-February as part of minor-league minicamp during MLB’s lockout. He joined the 40-man roster in April for his debut with the Tigers. His most memorable start was his second outing when he fired five innings of one-run ball in a 5-1 victory over the Los Angeles Dodgers at Dodger Stadium. Since landing on the injured list in July, Brieske has traveled everywhere with the Tigers as he rehabbed in the big leagues.

“It starts mechanically,” Brieske said. “If my mechanics are consistent, then I’m going to be able to have that consistent feel. The adjustment is easier if the mechanics are the same the whole time. That’s one of the biggest focuses that I will have this offseason.”

The next step in his development is to refine his arsenal and find consistency with all five of his pitches: fastball, changeup, slider, sinker and curveball.

“There were too many starts where I came out and gave up runs early,” Brieske said, “and then I found my rhythm, settled in and put a good start together. But it could have been a great start if I was executing and had my stuff right at the beginning. That’s something I’m going to look at.”

Báez, 29, was scratched from Tuesday’s lineup because of right knee soreness. He delivered a pinch-hit RBI single in the 11th inning.

“The play at the plate (Monday), where he was trying to avoid the tag,” Hinch said. “He didn’t say anything about it the night before, then he came in (Tuesday), and it was a little swollen up. I pulled him out of precaution.”

One man in custody after shooting in South Lansing

2 dead after motorcycle collides with car in Grand Rapids