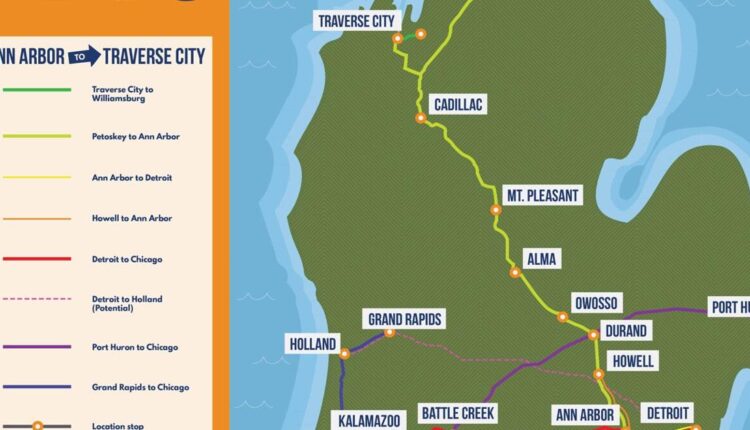 CADILLAC — A plan for statewide passenger rail service that had been put on hiatus by the COVID-19 pandemic is back on track thanks to an infusion of federal funding.

This week, the US Department of Transportation announced that the Cadillac Wexford Transit Authority, also known as the WexExpress, would be awarded a $1.3 million grant for the second phase of a passenger rail service study.

WexExpress Executive Director Carrie Thompson first applied for the grant last year but just barely missed out on receiving it at that time. A few tweaks to the application were all that were needed to be selected this time around.

Thompson said one of her motivations for applying for the grant was to ensure that Cadillac had a strong voice in the project moving forward, and didn’t get overshadowed by other communities along the line.

“We wanted to make sure Cadillac got the attention it deserves … that we weren’t forgotten about,” Thompson said. “We want to shape what this is going to look like in our community.”

The Groundwork Center for Resilient Communities, a nonprofit advocacy organization located in Traverse City, a few years ago completed the first phase of the study, which found that a passenger rail service through 15 counties from Ann Arbor to Petoskey was a viable project that could bring millions in revenue annually to Michigan.

Following the first phase, Groundwork had intended to test the concept and the market for regular passenger rail service with special event excursion trains but the pandemic derailed that plan.

To get the project moving forward again, Groundwork partnered with WexExpress to apply for funding for the second phase of the study, which is required by the federal government to obtain any additional funding toward repairs or construction work on the proposed line.

With the grant funding approved, WexExpress will be in charge of distributing the money to the partnering agencies involved in the upcoming study.

Currently, the rail line exists for freight service; phase II of the study will provide more detail about what improvements and enhancements need to be made to the line to make it work for passenger service.

Carolyn Ulstad, Groundwork staffer and one of the writers of the grant, said Cadillac could play a pretty big role in the project, as it would be a branching point between Traverse City and Petoskey. Such a branching point would require a rail station of some kind.

Ulstad said the $1.3 million from the federal government will be supplemented by $1 million that had previously been set aside by the state of Michigan in this year’s budget. She said Republican state Sen. Wayne Schmidt spearheaded the effort of getting this money set aside for the project.

Groundwork’s involvement in the study will entail public outreach, including charrette meetings to collect feedback about what how communities along the line would like to be involved in the project.

In addition to the public outreach initiative that will be undertaken by Groundwork, Ulstad said the second phase of the study also will include a technical analysis of the current rail conditions and what it will take to improve them. This work will be done by another consultant that has not yet been chosen. Another aspect of the project to be undertaken by a separate consultant is to maximize diversity, equity and inclusion in the passenger service.

With a total of $2.3 million available to complete this work, Ulstad said the opportunity now exists to delve deep into communities and how they will interact with the rail. In Cadillac, for instance, that could entail a “mini-study” looking at the connections between the rail system and existing transportation infrastructure, such as WexExpress busing.

A target date for finishing the second phase of the study is the end of 2023. Planners have indicated that they’d like to see some sort of passenger service up and running on the line within the next five years.

Detroit still has chance for a Black congressman

‘They’re trying to distract and divide us’ ⋆