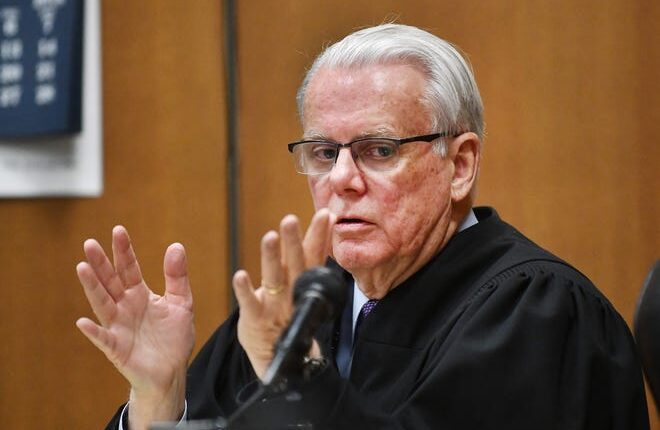 A Wayne County judge has denied a request Monday to change Detroit’s absentee voting processes ahead of Tuesday’s election, ruling that all of the claims advanced in a lawsuit filed by GOP Secretary of State candidate Kristina Karamo were “unsubstantiated and/or misinterpreted Michigan election law. “

Additionally, the plaintiffs’ initial request to have Detroiters vote in person or obtain an absentee ballot in person is a “clear violation” of constitutional rights to vote absentee in person or by mail, Wayne County Circuit Court Chief Judge Timothy Kenny ruled Monday.

Kenny not only denied a request for a preliminary injunction but dismissed the complaint altogether, calling it a “false flag” that sought to “demonize” Detroit election workers.

“While it is easy to hurl accusations of violations of law and corruption, it is another matter to come forward and produce the evidence our Constitution and laws require,” Kenny wrote. “Plaintiffs failed, in a full day evidentiary hearing, to produce any shreds of evidence.”

As of Nov. 3, 60,000 individuals had voted absentee in Detroit and a preliminary injunction would likely disenfranchise tens of thousands of those voters, Kenny wrote.

“The idea that the court would single out one community in the state to be treated adversely when plaintiffs have provided no evidence in support of their allegation simply cannot be allowed to occur,” Kenny said.

Kenny’s ruling comes a day ahead of the general election and in the midst of the second day of pre-processing of absentee ballots in Detroit.

More:Michigan clerks demanded ability to pre-process ballots; now many won’t do it

Karamo and other plaintiffs, including the Election Integrity Force and Fund, asked Wayne County Circuit Court last month to require Detroit residents to vote at the polls Tuesday or obtain an absentee ballot in person. The group also requested that the 58-member Wayne County circuit bench be disqualified from hearing the case.

Karamo’s lawyers, Philip Hartman and Alexandria Taylor, later relented and agreed to allow the case to proceed under Kenny.

On Friday, after closing arguments, plaintiffs also changed the relief they sought from a ban on most mail-in voting to several changes to the absentee counting process in Detroit.

The Friday filing asked Kenny to rule Detroit’s signature verification process was “not sufficient;” create public live stream video feeds of ballot drop boxes and save the recordings for 24 months; require the board of election inspectors at each precinct to re-check absentee ballot signatures after the clerk’s office had already done so; require overseas military ballots to be counted by hand; and prohibit the adjudication of certain ballots.

On Monday, Kenny wrote that Detroit City Clerk Janice Winfrey’s office uses a “reasonable agreement” standard for verifying the signatures of absentee voters at the city elections department that complies with state law.

The judge noted the city already keeps its ballot drop box video surveillance recordings for 30 days and that the process used by the clerk’s office for duplication of ballots is legal.

Additionally, the adjudication process used by Detroit to determine over-votes or inadvertent marks on a ballot, Kenny said, appears to comply with state law “and is not used as a mechanism for election workers to guess about voter intent.”

Plaintiffs’ delay in bringing the case until 13 days before the election was unjustified, Kenny wrote, and conflicts with state and federal case law that has “consistently held that delays in filing complaints in election matters until shortly before the election date or the time for sending out absentee ballots is grounds for denying relief.”

Absentee ballots were first made available to all Michigan voters during the last week in September.