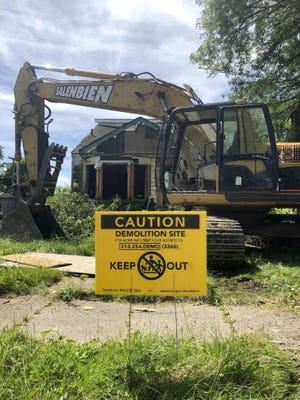 Federal inspectors earlier this year alerted the city to suspicions that contaminated dirt had been used at 200 Detroit lots where Den-Man Construction Services had demolished buildings in 2017 and 2018.

The city hired Professional Services Industries Inc. to test the fill material at 16 of those sites — eight demolition sites funded by city programs and eight funded by the Detroit Land Bank Authority — to determine whether they were contaminated.

The testing company found unsafe elevated levels of arsenic at seven of the eight city demolition sites it reviewed. Fill used at the eighth site also did “not fully meet quality standards,” the city said in a press release Thursday.

The testing company also found none of the eight Land Bank sites it sampled met quality standards, although they were not considered unsafe for direct contact.

Arsenic is a naturally occurring metalloid, but exposure to high concentrations of it can cause health issues including high blood pressure, headaches, stomachaches, circulatory issues and risk of cancer.

The city has ordered Den-Man to replace the material at the seven sites with elevated levels of arsenic and “immediately begin testing or replacement on another 127 sites of demolition it conducted as part of the city’s demolition program around the same time.”

Those seven city-funded sites where fill is unsafe for direct contact include:

Den-Man must put orange snow-fencing around the unsafe sites by Friday to deter people from encountering the unsafe material, the city said.

“The City of Detroit has some of the highest contractual standards for backfill material used by contractors at demolition sites in the nation,” Scott said. “Whenever we become aware of a breach of contract instance, we require the contractor to address the situation at their own cost.”

Den-Man also will test backfill at 57 other demolition sites it undertook for the Detroit Land Bank.

Under the land bank’s corrective action plan, Den-Man must begin securing those sites with snow-fencing by July 5, ensuring there is no trespassing over the sites until each is tested and found safe or gets new fill. The company must either test the sites to determine whether they are safe or replace fill material at them. The work must be completed by July 18.

Scott and Tim Devine, general counsel for the Detroit Land Bank, said they do not know where Den-Man purchased the unsafe fill.

The city and land bank will order Den-Man to reimburse them for the cost of independent testing, Devine said.

More:Dirt being tested from some of 200 Detroit demo sites for potential contamination