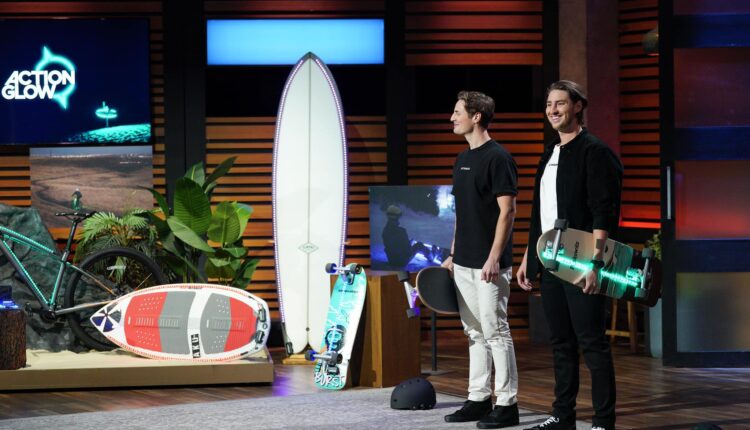 On November 18, millions will watch as Dakota and Garret make their pitch to the Shark Tank Cast: Mark Cuban, Robert Herjavec, Barbara Corcoran, Lori Greiner and Kevin (Mr. Wonderful) O’Leary. They sought Shark Tank support for dramatically expanding marketing for their patented ActionGlow LED lighting system with the added twist of changing into nine colors on the fly. The two brothers admit to leaning toward Cuban and Herjavec as ideal partners; Cuban because he is owner of the Dallas Mavericks and has technology investments and Herjavec since technology is a primary focus of his business portfolio.

But what happens next is anyone’s guess until it airs on November 18. When asked how well they think they did, the brothers simply say “great!”, which builds even more suspense.

“Throughout all of this, beginning over a dozen years ago at their lemonade stand and when they graduated into selling hand-carved walking sticks, we encouraged them to ‘go for it’,” they say.

“As parents, we can’t do enough to encourage, support and listen to our kids while spending quality time together,” said Dane. “Through fishing, hunting, scouts and coaching sports, we experienced things together that will last a lifetime.”

When asked for advice about getting children unpeeled from electronics, Cristina had three short words: “Get them outdoors.”

“They also learned by seeing their parents working hard every day,” she said. “While we did what we could, the boys learned early on that it was up to them to be responsible for their own course. Scouts had such a positive impact by teaching them the building blocks to success.”

“As young men, we also know that some of their decisions reflected a ‘what’s the worst that can happen optimism,’ Cristina Chuckles.

The Porter boys may have needed to incorporate the business in their parent’s names as their status as minors made them ineligible to own a Michigan business, but they didn’t let their age stop them from hustling to raise money any way they could. They collected neighbors’ pop cans to pay for their LLC and sought out Traverse-area businesses willing to pay to have their logos posted on a promotional ‘Making Dreams Come True’ sign to display at various business-related events.

What they didn’t know, they reached out to others who might. Garret, in fact, points to this as one of the keys to their success, “Just asking for help, asking questions.” They recruited volunteer mentors to help them with legal, planning and financing and eventually became the youngest members ever at the Traverse City Area Chamber of Commerce.

“We were proud to offer our support to the Porter sons and their family at an early stage,” says Laura Galbraith, President of Venture North Funding and Development. “We provided them with affordable loan capital beginning nine years ago, in 2013. As their business grew, our help grew with them and we provided more capital in 2016 and again in 2022, most recently to help them ramp up inventory levels in anticipation of Customer response with the airing on Shark Tank. Our partnership with the Porters will always be a wonderful example for us about entrepreneurial accomplishment, driven by character, integrity and innovation as well as carefully thought-out plans.”