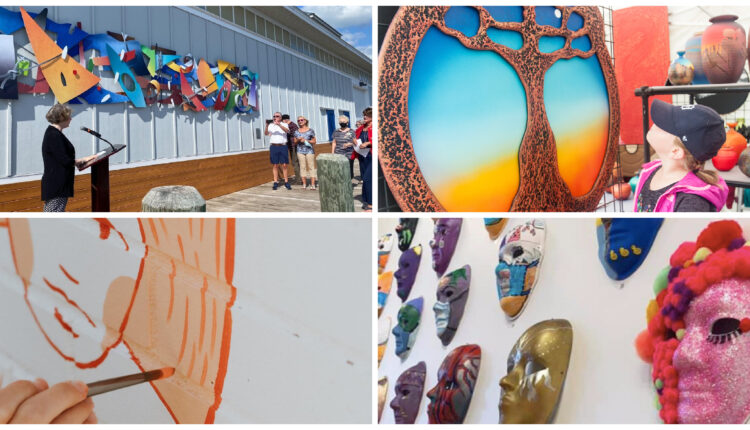 The Return Of Public Art

After a month-long hiatus during the pandemic, the city’s public art projects – along with art events like the Traverse City Downtown Art Fair Series – are making a comeback. No street art will be painted on Front Street this year – Downtown Development Authority (DDA) leadership confirms Front Street will remain open to vehicle traffic this summer – but new artwork is planned for other parts of the city center.

Harry Burkholder, COO of DDA, says that in 2020 when the pandemic peaked, the Traverse City Arts Commission had its meetings completely suspended and projects delayed. In the summer of 2020, the art commission, which manages the city’s public art program with administrative support from the DDA, was able to incorporate two projects into the works before the pandemic: a sculpture by Daniel Roache on the side of the Traverse City Area Community sailboat house in Hull Park and a mural by Em Randall on the small brick building at Sara Hardy Downtown Farmers Market.

Now the Art Commission is preparing to install at least two more public art projects this year and go through a strategic planning process to identify opportunities for 2022 and beyond. Following a public call for submissions, the Board recently selected a suggestion from local artist Brian Ferriby to install an interactive structural piece called the Big Saw at the Tenth Street trailhead of the TART Trail near Oryana. In his suggestion, Ferriby says the piece will pay tribute to Boardman Lake’s earlier use as a weighing station for transported white pine logs with elements that conjure up trees, foliage, and the large chop saws that were previously used to fell large trees.

The Arts Commission has budgeted $ 10,000 for the project, with TART Trails providing nearly $ 15,000 for landscape improvements around the artwork and trailhead. According to Burkholder, the DDA is working to sign a deal with Ferriby. The piece is expected to be installed in late summer or early fall. “Big Saw,” Roache’s boathouse sculpture, and another future piece near Sixteenth Street are being promoted as the “Art on the TART” collection, encouraging bikers and pedestrians to visit the soon-to-be-completed Boardman Lake -Boop to tour and visit the various works.

The Art Commission also announced this week a call for artists for a new project called the “Union” Mural Project. Two pairs of 5’x5 ‘murals – or four murals total – are scheduled to be painted on the south and north ends of Union Street, with one pair on the alley walls between The Dish Café and Pavlova and the other pair on the south. opposite wall of the AT&T store on the corner of Union Street and Eighth Street. The project documents state: “The Traverse City Arts Commission began to consider that the name of the street (Union) could be used to the benefit of the community, especially in this current political climate where lack of unity seems to be a common issue. Beyond the traditional concept of a single mural, the Art Commission came up with the idea of ​​creating “pairs” (or “unions”) of murals along Union Street to indicate the symbolic nature of the concept. “

Artists over the age of 18 are encouraged to apply (ideally in pairs) by April 22nd. Compensation is up to $ 2,000 per artist plus an additional $ 1,000 per artist for eligible travel and meals. The art commission also pays for all art objects. The total project budget is $ 19,500, including $ 2,000 funded by the Michigan Council for Arts and Cultural Affairs. The murals will be painted in June / July of this year with a planned tape cut in July / August.

While murals are coming to Union Street this summer, they won’t be painted on Front Street. The DDA teamed up with Up North Pride in 2020 to paint two blocks of Front Street rainbow colors as part of the summer-long road closure. The color also serves as a safety measure to identify the tracks left by emergency vehicles. Burkholder says the DDA will keep Front Street open and unpainted this year, a traffic flow decision that “was made primarily because all of these bridge projects are going to be underway,” he says, referring to concurrent repair projects going on for the South Cass Street, Eighth Street, and Park Street bridges are planned. The DDA plans to bring back its Downtown Art Fair Series this summer, but the events will likely be held in parks rather than downtown streets. Nick Viox, Coordinator for Downtown Experience, says the July art fair, in partnership with the National Cherry Festival, will likely take place on the lawn in the Village at Grand Traverse Commons, while the parks are still to be confirmed for the June and August events.

In other parts of the city there are again opportunities for the public to experience visual art. After the Dennos Museum Center held numerous virtual events during the pandemic, it personally welcomed visitors with recent popular exhibitions such as the current Dex. R Jones: Storied Portraits (ends this Sunday) and Blow Up II: Inflatable Contemporary Art. The Higher Art Gallery expanded from its previous excavations on Union Street to a larger venue at 219 East Front Street in November, reintroducing personal shows, including Melonie Steffes’ current solo show, “Undomesticating,” April).

The Crooked Tree Arts Center is also gearing up for a busy season of community arts, including the open-air painting festival and Paint Grand Traverse competition in August. The venue is also preparing for the debut visual art inspired by the pandemic itself. Crooked Tree will host a “Stay Safe” mask exhibition curated by Michigan Legacy Art Park and originally shown at the Ramsdell Regional Center for the Arts, featuring over 200 paper mache masks painted by residents of Northern Michigan and beyond. to record their personal experiences during the quarantine. The project involved students from both Traverse City West and Central Senior High Schools, as well as a wide variety of children, families, retirees, and even celebrities like James Earl Jones. The Traverse City exhibition runs April 1–17 and is free and open to the public.