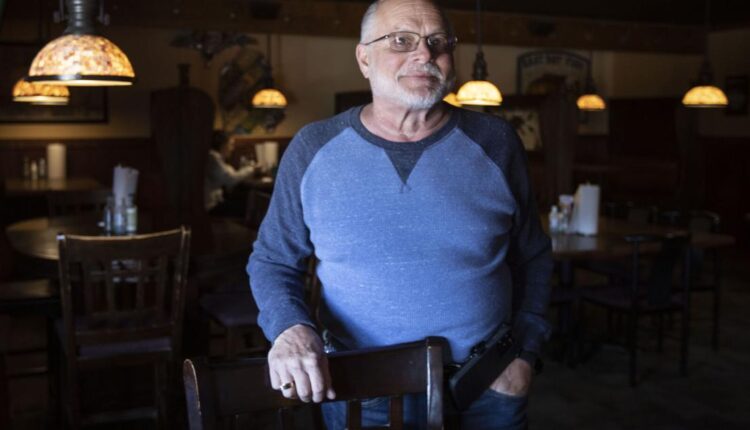 The house that George constructed: Founder is still in the kitchen at Peegeo’s | News

TRAVERSE CITY — George VanKersen had cooked very little until he started his own restaurant about 38 years ago.

He hasn’t stopped since — and that goes for even after he sold it two years ago.

“I wanted to make pizza,” says VanKersen, 65, explaining that he bought “a mom and pop grocery store and a building next door that used to sell snowmobiles.

“If you put a pin in a map, we’re like dead center in East Bay Township.”

He started out offering pizzas and sub sandwiches, developing recipes as he went.

“The neighborhood kept putting pressure on me to have a Friday night fish fry, so I learned how to do that,” he says. “We were here about three years and got a liquor license, so then we built a new kitchen … and we’ve added on like six times.

“It just kind of evolved.”

He did a lot of experimenting with recipes, and had an expert come in and show him how to make pizza dough from scratch.

“I got recipes from my mom,” he says. “I started looking for stuff in cookbooks. And I was lucky enough to hire awesome employees along the way who were all willing to lend a hand.”

Peegeo’s expanded to offer burgers, and a roster of Mexican items. When VanKersen hired a cook, business doubled in a year, though he notes that it was slow going in the beginning.

“You could blow a cannon off in here and not hit anybody,” he recalls. “Like anything else, you’ve got to build it. It was a struggle at first, and it ended up being 37 years of 80-hour work weeks.

“It’s not really a job, it’s a lifestyle. But when you love it, you’re not really working.”

He loved it so much that when he and his wife, Susan, sold the restaurant just before the pandemic shutdowns began in March 2020, he stayed on. He hadn’t intended to.

But then came the pandemic — and everything changed.

“The pandemic hit literally 30 days after we sold,” he explains. “That’s what made me stay. I said I’d just stay and help through the pandemic.

Dane Porter, director of operations for Magnum Hospitality and general manager of Pearl’s New Orleans Kitchen, is one of the partners in Peegeo’s Incorporated, a separate entity from Magnum that purchased the restaurant from the VanKersens. He says that George’s decision to remain involved was one of the best things that could have happened.

“He gets what he wants, which is to be able to run his restaurant, but not with the amount of time he was putting into it,” Porter says. “He wanted to free himself up a little bit, but after you do that for 37 years, you just can’t quit cold turkey.

VanKersen says that includes everything he used to do except for payroll and accounting, which Susan also helped manage. Being freed from those obligations has been huge, he says — that and being able to take time off when he wants to. He and Susan love to travel — across the United States in their motor home, and to foreign countries.

“My wife and I have been to 19 different countries,” he says. “We’re leaving for Bora Bora in a couple of weeks.

“We just love it, getting to see how other people live. And you want to try every food you can try.”

For her part, Susan is happy her husband continues to be involved at Peegeo’s.

“It was a big decision to sell, but he got to keep working there, so it’s a good way to wind down,” says Susan, who works full-time managing a law firm. “I understand why he’s so committed. That was his baby for 37 to 38 years.”

As Porter put it, “It’s the house that George built, and to have George still in the house is unbelievable.”

Preheat oven to 350. Mix all ingredients in a large bowl. Spoon into shallow 1-quart baking dish.

Bake 20 minutes or until mixture is heated through; stir. Sprinkle with green onions. Serve with chips, crackers and/or cut up veggies.

VanKersen makes about 700 of these bourbon balls at the Christmas holidays, serving them for the restaurant’s Customer Appreciation party and taking them to his doctor’s office and to people where he banks.

Optional: Whole pecans for topping each bourbon ball, or melted white chocolate to drizzle on top

Combine pecans and bourbon. Wait at least 3 hours (VanKersen lets them sit overnight in the fridge.) Cream butter and sugar with mixer. Add bourbon/pecan mixture. Refrigerate for at least 3 hours. Roll mixture into small balls and chill in refrigerator. (VanKersen puts them in the freezer because it prevents them from falling apart when you dip them in the next step.)

Melt chocolate in a double boiler, gradually adding the shaved paraffin. Dip chilled or frozen balls in melted chocolate. (He uses a fork and to roll them around to get complete coverage.) Place dipped ball on waxed paper.