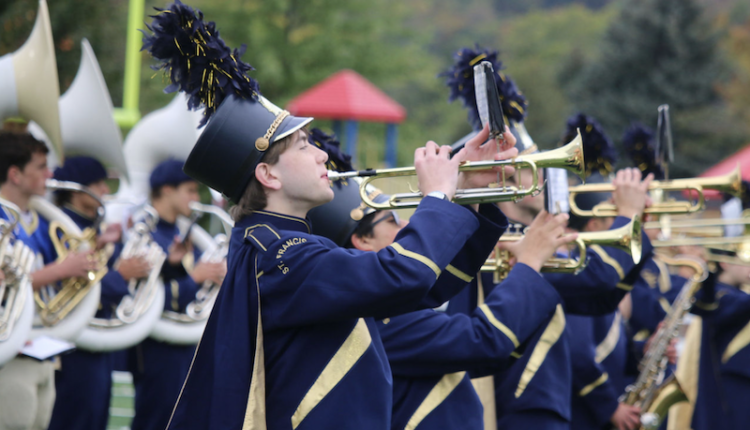 The crowd goes silent, all eyes glued to the 50-yard line. There, teams aren’t lining up to blitz, pass, or tackle. This moment is about musicians taking a breath before filling the stadium with the sounds of everything from Sousa to Lady Gaga, “The Star Spangled Banner” to the school fight song.

Across the region, as football season begins, so too does marching band season. Schools large and small showcase the skills of their bands as trumpets and trombones blare, woodwinds trill, and fans throughout the stadium tap their feet to the beat of the drums.

Practice Makes Perfect
Like their football counterparts, marching band musicians have their own pre-season practices. For some schools, it’s a few hours a week; for others, two weeks of two-a-days.

At Traverse City St. Francis, marching band director Charles Taylor says some 90 percent of the students in band are also involved in athletics. “We can’t do rehearsals. We get it done in the summer,” he says.

With such limited time to practice, choosing the material for their shows becomes paramount. For most, it’s a process that involves other staff as well as the band members themselves. “We get song [suggestions] from the students,” says Chad Mielens, band director at Traverse City West High School.

Hotelling agrees. “The kids give us ideas,” he says.

At St. Francis, Charles says he and the staff start in the spring, listening to music and to student suggestions. He says it’s important to select music that the students and crowd will enjoy, as well as to find pieces that aren’t too easy. “We want the kids to be challenged,” he says.

Mielens says once all thoughts and suggestions are in, the band leaders come up with an overall conceptual theme that the music will coalesce around. “This year, it’s the circus,” he says of the show that’s been dubbed “The Greatest Show on Turf,” borrowing the phrase from the St. Louis Rams’ record-breaking offense during the 1999, 2000, and 2001 NFL seasons. The show includes music from the film The Greatest Showman, Cirque du Soleil, and even Britney Spears’ pop hit “Circus.”

conflict competition
As teams vary in size, so too do the bands, not only from school to school but from year to year. “Last year we had close to 80 kids. This year it’s at least 60,” says Taylor of the St. Francis band, though that’s on a good day. When conflicts arise—and they inevitably do—the band suffers. “If we have cross-country on the same day as football, there’s not enough kids to march. If it’s a Saturday afternoon game, we’re almost assured we can’t march.”

A challenge for all the bands is the fact there are more options than ever vying for students’ attention. “Even though the program has grown, there are more conflicts,” says Taylor. Sports such as rugby, rowing, lacrosse, and cross-country can take precedence. Students who work during the school year also face scheduling challenges.

The increasing demand of academics also takes a toll on participation, with a need for high grades and AP classes trumping extra-curricular activities such as band for many colleges and universities. “When I first taught, band was good for college [as an extracurricular activity]. Now, it’s a detriment,” Taylor says ruefully.

At some schools, long-standing connections and programs help keep tradition alive. At others, traditions must be established for programs to grow. Hotelling has seen that firsthand. “I marched 35 [band members] the first year,” he says.

Eight years later? “This year should be around 120.”

He’s quick to spread the credit. “There was a lot of support to see the band grow,” he says. That includes support from the athletic staff, and Hotelling has even had some of the football players perform…in their football uniforms.

More Music
While playing at football games is the center of the marching band’s universe, things like parades and competitions offer another chance for the band members to strut their stuff.

Hotelling says Gaylord’s band plays its homecoming parade and Alpenfest parade in the summer. “We do Central Michigan’s Band Day and go to Traverse City for the marching band exhibition,” he adds. Those latter two also provide participating bands the opportunity to not only perform for another crowd but to see and hear other marching bands.

While the conclusion of their senior year is the end of the performing career for the majority of band members, some go on to play in college and university marching bands across the state and elsewhere. “At one point we had three (alums) in the Notre Dame band,” Taylor says proudly. This year, the drum major at Notre Dame will be a St. Francis grad.

Is the hard work and demanding schedule worthwhile? The crowds would surely say so. And beyond the entertainment aspect of the performances, the directors say marching band teaches kids about music and life skills, such as teamwork and learning to work and get along with others who may not be like them, while serving as an outreach to the community.

“Our goal is to make good music, entertain the crowd, and support the team,” Hotelling says.