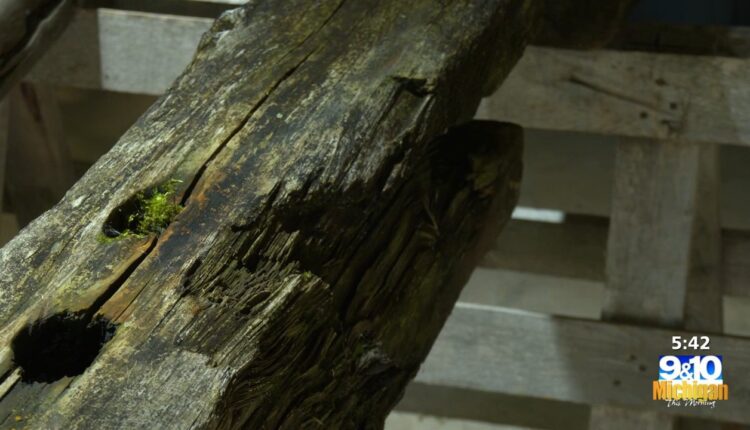 It’s estimated there are about 6,000 vessels lost in the great lakes.

About 1,500 of those are believed to be in Lake Michigan.

A shipwreck will rarely wash up on shore, but for Patrick McKee, it happened, and he’s paying it forward with the stuff he found.

On Christmas day in 1978, a two-masted schooner named the Lark washed on shore in Leland after sinking during a November storm in 1872.

“I’d never seen that much wood on a beach at one time, and I don’t think many people had, because this thing was 100 feet long and 16 to 18 feet wide, fully ribbed and fully plank, bottom, and top . And that was very, very rare to find,” explained Patrick McKee.

McKee knew he wanted it. He got approval from the state to take ownership.

“I was in awe because I’ve always done work with that type of wood, but never had that amount,” said McKee.

After several months of dismantling the shipwreck, he started turning the shipping wood into clocks and tables.

McKee has made dozens of items from the ship wood, most have been used to raise money for charities.

A clock made from the ship wood will be auctioned off in October.

“The clock has all the paperwork to show where it came from, the ship permits from the DNR,” said McKee. “It’s a pretty nice piece of history for someone who can really appreciate that kind of thing.”

All the auction money will go to St. Jude Children’s Research Hospital.

“All my life, I’ve done giving things. This just seemed to be like another slot got filled for me. I learned this from my dad way back. My dad showed me when I was very young about giving it,” said McKee.

The phone auction starts on October 15th and runs until October 30th. The clock will be displayed at the Traverse City Opera House during this time.

However, Patrick says he will start taking bids on September 28th.

Republicans saw the economy as Whitmer’s big weakness in the election. Has that changed? ⋆