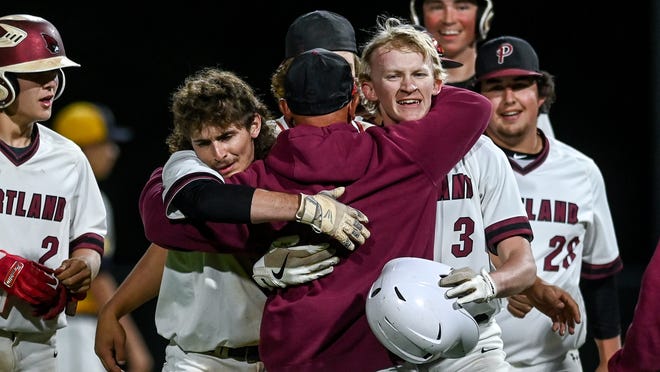 EAST LANSING — Logan Dunham couldn’t tell you what his heart rate was at.

All the senior knew is his heart rate was getting up there as he found himself in the batter’s box in a big moment for the St. Johns baseball team.

The primary objective for Dunham was to now screw up as he saw the go-ahead run standing at third base.

And Dunham got the job done.

Dunham’s two-RBI up the single capped a late rally for St. Johns in its 7-5 victory over Lansing Catholic in a Dean Shippey Capital Diamond Classic quarterfinal Tuesday at Michigan State’s McLane Stadium.

“I’m very glad that I got that through,” Dunham said. “I didn’t want to be the guy to screw that up for my teammates and let everybody down after we just rallied back like that.”

Dunham’s capped a five-run rally in the bottom of the sixth inning for the CAAC Red champion Redwings. Lansing Catholic had a 4-2 lead entering the frame and had limited a potent St. John offense to just one hit.

But the Redwings put things together with Logan Keilen, Brody Kusnier and Brennan Feldpausch driving in runs to set up the big moment for Dunham with two outs.

“Logan is a competitor,” St. John’s coach Jake Parker said. “He competes. That’s what we preach. Two strikes, every at-bat we want to compete and that’s what Logan does. Every time we send him out on the mound (that’s what he does.) That’s why he started because I know he’s going to go out and compete.

“As a competitor, when it’s not going well for you, some guys – it can kind of really get to them. He doesn’t. He just keeps competing and does what he can do. That’s what he did. It was the perfect guy in the perfect spot as they say in baseball. It was good to see him do it.”

Dunham said the hit provided a confidence boost because he has been in a slump at the plate. He also was glad to have a big hit to make up for his outing on the mound to start the game.

Dunham was relieved from the mound after 2 2/3 innings when Lansing Catholic had taken a 3-2 lead.

“”I had a rough pitching outing at the start and it feels great to come back and get the two winning RBIs out of that,” Dunham said. “I got to thank everybody up in front of me who got on base, got hits and just did a great job. It was just a great team effort.”

Ty Rakan had two RBI and scored a run and Drew Burlingame plated a run for Lansing Catholic.

St. Johns advances to face either Okemos or Mason in a June 1 semifinal at Kircher Municipal Field.