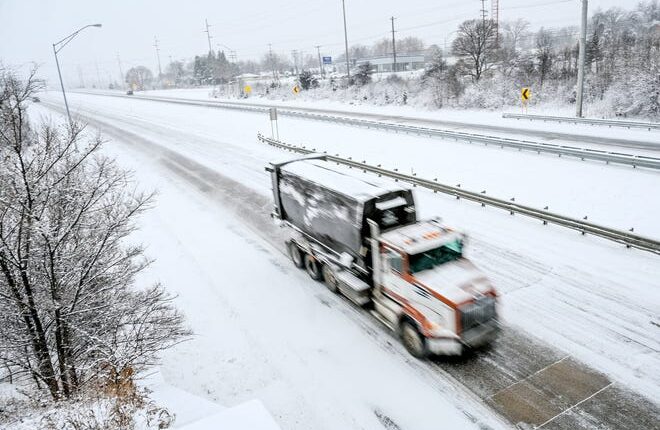 “It’s just a little bit warmer than it was in 2019, but not by much,” he said. “Although it is windier than it was during that event.”

Lansing area temperatures are hovering around 7 degrees. The wind chill was about 15 degrees below zero Friday and Saturday will be about 5 to 10 degrees, he said.

Friday’s high will be in the low teens before dropping into single digits overnight, and Saturday temperatures won’t move out of the teens, Scholten said.

Scholten said with the cold winds any exposed skin will lose heat more quickly and frostbite is a concern for anyone outside with exposed skin for 30 minutes.

He said Lansing has received the majority of snow it will get during this winter storm, with about 3 to 5 inches in the Lansing area.

But the blowing and drifting snow is creating some deeper snow drifts, he said.

“It’s really windy in Lansing and you’re getting some blowing snow reported there too,” he said. “Wind gusts between 35, maybe as high as 45 miles an hour, in Lansing and Battle Creek are expected this afternoon and evening, which would really kick up some snow which could cause some whiteout conditions.”

Scholten said conditions are only “very slowly” going to get better tomorrow. People may see some lake-effect snow showers stretching to Lansing, providing some occasional dustings of new snow.

But the winds are still going to be frequently gusting 30 to 35 mph Saturday and cold temperatures are going to be the norm for the next few days. And high temperatures on Christmas will only be about 20 degrees, he said.

“So the good news is once we get to about Christmas Sunday, the winds should calm down enough and the lake effect snow should be reduced enough, travel should become a little bit easier,” he said. “There should still be plenty of snow and ice on the roads because it’ll be so cold. But at least the new snowfall and the blowing and drifting snow will become less common gradually going into Christmas.”

Nicole Noll-Williams, President and CEO of the Capital Region Airport Authority, said the airport would remain open but that customers should check with their airlines before coming to the airport.

“As we’ve seen over the last 24 hours, weather can impact travel and cause flight delays and cancellations,” Noll-Williams said. “Before heading to the airport, customers should check directly with their airline for the most up-to- date and accurate information about the status of their flight. Be prepared to be flexible with respect to travel plans.

“While LAN will remain open and operational, the safety of our customers and tenants is our number one priority. We hope everyone remains safe and want to remind travelers to be patient with airline staff while they work through flight schedule changes.”

US-127 closed due to crashes

The freeway was closed at the Cedar Street exit as of 10 am Friday, according to an Ingham County Sheriff’s Office Facebook post. No other details were released.

Ingham County 911 in an alert said the southbound lanes south of Interstate 496 near Forest Road were also closed.

Ingham County issued an alert about 10:30 am that said roads in the county were slippery and people who decide to travel should use caution.

The Sheriff’s Office said that road salt was losing its effectiveness because of the cold temperatures.

Law enforcement have encouraged travelers to stay off the roads as Friday’s winter storm has brought snow, high winds and frigid temperatures to the region.