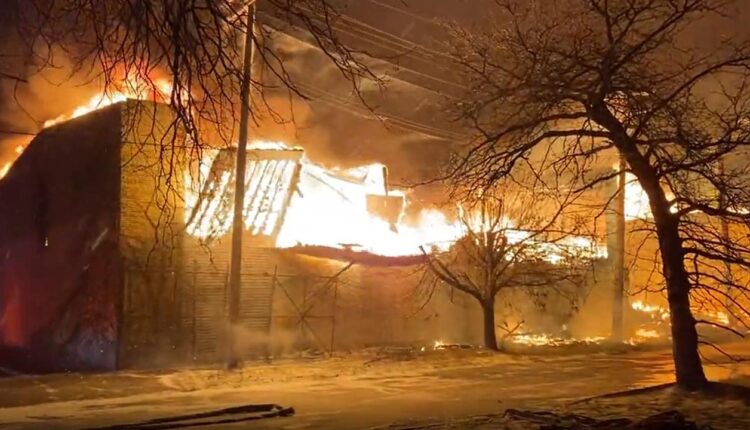 Massive blaze breaks out Detroit warehouse on city’s east side

No one was injured in a blaze that was upgraded to a four-alarm fire Friday morning after a large vacant building became engulfed in flames. The wind from the winter storm that rolled through made battling it very difficult.

DETROIT (FOX 2) – A blaze at a vacant warehouse on Detroit’s east side was upgraded to a four-alarm fire Friday morning before firefighters got the scene under control.

Crews battled the fire in very tough conditions thanks to the latest winter storm to pass through, pushing wind speeds up to 55 mph.

Fire Chief James Harris said the gusts could have sent the fire “any direction at any moment.”

The fire, which broke out at a building that’s about 300 square feet, was upgraded to a three alarm fire around the time crews were dispatched to the site. It happened near Canton and Lafayette.

Massive blaze breaks out at vacant warehouse in Detroit

Video of the fire while it was still burning hot showed the structure falling apart as flames licked the sides and climbed into the ceiling. As morning turned to day and the sun came up, the flames continued to burn.

Plumes of smoke replaced the flames around 10 am, prompting the department to evacuate a nearby apartment building.

No injuries have been reported. There were several boats and cars inside the building, which has been declared a total loss. At one point, there were 65 firefighters on scene.

A preliminary investigation is still underway and no cause of the fire has been determined.

where to go in Kent County, Grand Rapids