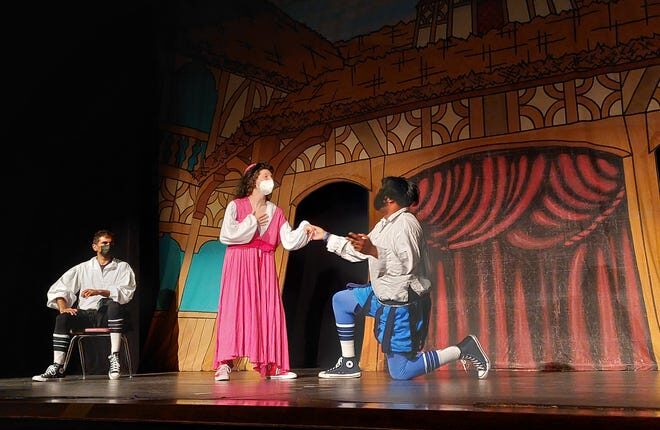 How do you perform all of Shakespeare’s works in less than two hours — even “Hamlet?” You almost do it. Really almost. And have fun with it.

That’s Shakespeare in Detroit’s plan as the theater company finally returns to live performances after a four-year break Wednesday with “The Complete Works of William Shakespeare {abridged} [revised].” A quick take on 37 plays in the Bard’s canon, the show runs through May 29 in the company’s new home at the former Marygrove College (see box for ticket details).

“It’s quite a sprint for the three actors who are playing all of the characters,” said Sam White, Shakespeare in Detroit’s founder and executive director.

The program, a co-production with the African-American Shakespeare Company in San Francisco and directed by Reed Martin, includes every tragedy and comedy from “King Lear” to “Romeo and Juliet.” Each play gets two to three minutes.

And whether you love Shakespeare or can’t stand him, the show really offers something for everyone, White said. For students who are studying Shakespeare, it’s a great way to see his works.

Even “if people hate Shakespeare, this is a great way to come laugh at him,” she said. “We made it funny. There are dinosaurs. We make references to the ‘Fresh Prince of Bel-Air’ and other contemporary references. It’s a good time for 75 minutes.”

“Complete Works” marks Shakespeare in Detroit’s first live performance since 2018 and their first in their new space at Marygrove. The company was supposed to move into a new theater on the Detroit Riverfront but then the building was canceled. On top of it all, COVID-19 hit.

Marygrove Conservancy then offered the company a space, which it moved into last year and is finally utilizing this year.

Shakespeare in Detroit was founded in 2013 and held its first performances just weeks after the city filed for bankruptcy. White said she knew her mother would come to a show but about 500 people showed up for their first performances.

“We’ve continued to have a pretty loyal audience,” said White.

For the last four years, the company has focused on educational programming, working in three Detroit schools and teaching not just Shakespeare but even technical aspects of theater. And just as schools everywhere pivoted to online during COVID-19, so did Shakespeare in Detroit, teaching students remotely while also trying to grow its educational program.

“We were actually at the schools when the superintendent announced that school was canceled because the virus had made it to our neck of the woods,” White said.

Still, the company missed its professional work, said White. So much so she said they were ready to do some performances on someone’s porch if it came to that.

The three actors who perform in “The Complete Works of William Shakespeare {abridged} [revised]” — they also did the show in San Francisco — do a lot of running and using different props to act out each play.

“The three actors are exhausted when the show is done,” said White. They’re “constantly running on and off stage to retrieve new props, change their clothes and jolt to the next play or scene. It all works out.”

Ultimately, Shakespeare in Detroit hopes to hold a summer Shakespeare festival, possibly as early as next year. White said they’ve performed in some of the city’s parks before but never multiple parks at once.

“That’s the goal. That’s the vision for next year and moving forward,” she said. “Detroit has the Movement festival. They have the Pride Festival. We have the auto show. But in the theater space there are no traditions, or something people can anticipate every year. We want to bring that to Detroit.”

An abridged version presented by Shakespeare in Detroit.

Wednesday through May 29 at Marygrove College.

For show times and tickets, go to Shakespeareindetroit.com.