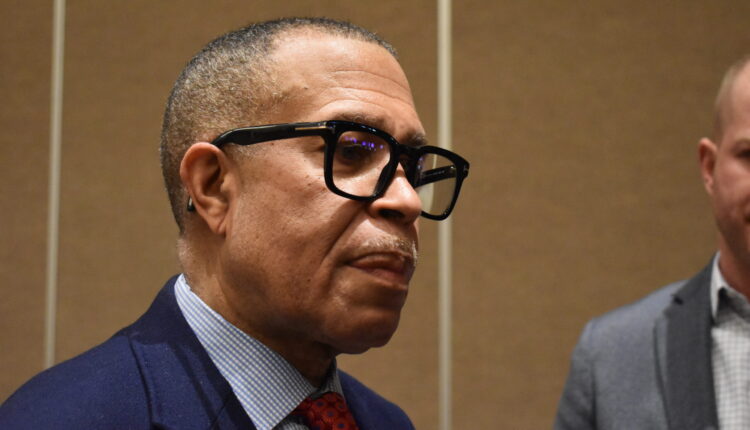 After failing to get the courts to reverse a decision that kept him off the August primary ballot, former Detroit Police Chief James Craig said he will run for the GOP gubernatorial nomination as a write-in candidate.

Craig made the announcement Thursday night on “Let It Rip” on WJBK-TV.

Speaking with host Roop Raj, Craig said he was not giving up, despite the Michigan Supreme Court deciding in favor of a state Bureau of Elections (BOE) ruling that he and several GOP candidates, including businessman Perry Johnson, should be denied a spot because they submitted thousands of fraudulent petition signatures.

“They have robbed me, and robbed Perry and guess what — write-in,” he told Raj. “There are so many people that have reached out through my campaign who have said, ‘Chief, you are a fighter; don’t give up; continue to fight.’ Guess what? I’m going to.”

Craig also said he “absolutely” had the name recognition to mount a successful write-in campaign.

Countering that opinion was Johnson, who also appeared on the program, and said it would be very difficult to win a write-in campaign.

“I think you have to get on the ballot,” said Johnson. “That’s why I filed in the court.”

Johnson, a self-described “quality guru,” on Monday filed suit in the U.S. District Court for Michigan’s Eastern District, seeking an injunction to halt the printing of ballots and an order overturning the decision to keep his name from appearing on them.

Craig, Johnson, financial adviser Michael Markey and businesswoman Donna Brandenburg had all appealed to the Michigan Supreme Court to overturn lower court rulings that also favored the BOE ruling and place them on the August primary ballot.

But in a 6-1 majority opinion, the justices said claims from Johnson, Craig and Markey lacked merit because they did not demonstrate that the Board of State Canvassers had a “clear legal duty” to certify their names to the ballot when they lacked the required number of valid petition signatures.

State elections officials recommended five candidates be dropped from the ballot after the Bureau of Elections (BOE) released a report detailing an “unprecedented” number of fraudulent signatures. That recommendation was then upheld when the Board of State Canvassers (BSC) deadlocked along party lines. One of the candidates, Michigan State Police Capt. Michael Brown, had already dropped out of the race.

Craig’s decision came on the same day fellow GOP gubernatorial candidate Ryan Kelley was arraigned on federal charges related to the Jan. 6 attack on the U.S. Capitol following a raid by the FBI Thursday morning at his home in Allendale Township in West Michigan.

The winner of the GOP primary will face Democratic Gov. Gretchen Whitmer on Nov. 8.