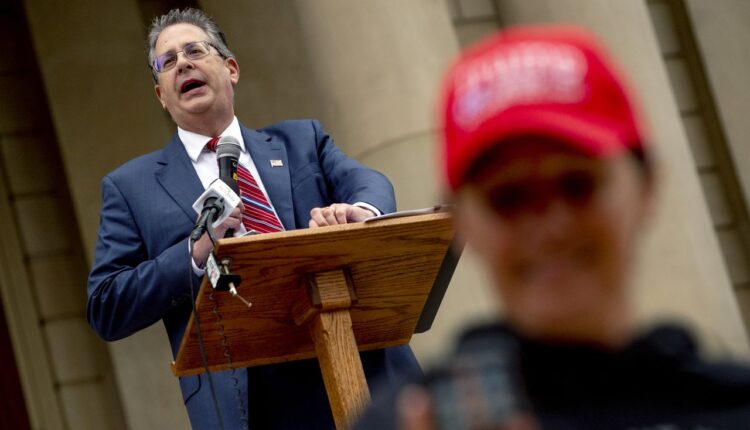 Republicans running for attorney general pledged to investigate the 2020 election and Gov. Gretchen Whitmer’s COVID-19 restrictions and opposed US Supreme Court rulings that established the right to abortion and contraception.

Former Speaker of the House Tom Leonard, Kalamazoo attorney Matthew DePerno and state Rep. Ryan Berman, R-Commerce Twp., took questions from GOP delegates and voters last Friday during a candidate forum at Alpena Community College. Candidates each made a case for why they can beat Democratic Attorney General Dana Nessel and laid out similar agendas to investigate crime, protect the Enbridge Line 5 tunnel project and seek another audit of the last election.

Michigan does not hold primary elections for attorney general. Instead, political parties hold conventions at which delegates vote to select which candidate gets the nomination. The winner goes on to face the Democratic nominee in the November general election. Republican hopefuls played to their audience Friday, with DePerno often pointing to former President Donald Trump’s endorsement of his candidacy.

“I stood up for Donald Trump when no one else would, and if anyone in the party doesn’t understand what that means, take a closer look,” DePerno said. “The President of the United States, the leader of this party, has endorsed me because he knows the type of fighter I am.”

Leonard was the Republican nominee in 2018, but he lost to Nessel by 3 percentage points. He’s leading the fundraising race, with $665,968 in reported cash to spend at the start of the year compared to Berman’s $279,018 and DePerno’s $61,178. Though DePerno is struggling to raise funds for his campaign, he argues the base of the party has his back.

Election integrity and retribution for 2020 have been major themes in the attorney general’s race. Some conservative activists remain unsatisfied with audits and an investigation by Republican lawmakers that found no evidence that widespread fraud caused Trump’s loss in Michigan.

“I would think that anyone who’s vying for the top prosecutor’s office in the state would be passionate about prosecuting crime, and the implications of the crime that went on Nov. 3, 2020, as a matter of state and national security,” the man said, his voice rising as he continued. “How can anyone who is not on the frontlines of that battle expect the average citizen of Michigan to take them seriously to be our next attorney general?”

DePerno launched his political career after leading an unsuccessful lawsuit with challenging election results in Antrim County. He’s since headlined several rallies outside the Capitol and around Michigan calling for another investigation into allegations of voter fraud. DePerno said another audit is needed, but he already knows a “deep dive” into voting machines and paper ballots would show the election was manipulated.

Leonard said he supports another audit because half the population no longer trusts the integrity of election processes. Leonard said the “biggest fraud” was Nessel’s decision not to challenge guidance issued to clerks to presume the accuracy of absentee ballot signatures.

Berman touted his support of a $5.5 million budget amendment for a “forensic audit” but said his colleagues in the state House shot down the idea. Berman also voted for legislation preventing voting machines from being connected to the internet, although election officials said this already doesn’t happen. Whitmer vetoed the bill.

Berman agreed that another audit of the election — which would come on top of 250 audits by bipartisan clerks across the state — would help assume concerns by conservatives who worry their vote won’t be counted.

“You can’t put your head in the sand because this is a public issue and we can’t let whether it’s our side or the other side in 2022 (or) 2024 have any excuses why they lost,” Berman said.

DePerno said Michigan lawmakers, including Berman, let him down by not doing more to prevent Trump’s loss. DePerno argued lawmakers “have the power to decertify the election or recall electors” if there is evidence of any fraud whatsoever.

Candidates were also asked to give their opinion on Griswold v. Connecticut, a 1965 Supreme Court ruling that protected the right of marital privacy against state restrictions on contraceptives. None of the Republican hopefuls knew the case from memory but said they opposed the ruling once informed about it by the audience.

In a 7-2 decision, the court ruled that married couples could buy birth control without government restriction. The case was used as a precedent in later rulings extending the right to unmarried couples and in the landmark Roe v. Wade ruling that legalized abortion.

DePerno agreed that Roe and Griswold are state’s rights issues and predicted that the Supreme Court would rule that “the privacy issue currently is unworkable.”

Anti-abortion activists are eager to see Roe v. Wade overturned by a conservative majority on the Supreme Court. A ruling is expected this summer on a case that could make it possible for states to ban abortion procedures. Michigan has an old law outlawing abortion that would immediately go into effect if Roe v. Wade is nullified.

Leonard was endorsed by Right to Life of Michigan, the state’s most influential anti-abortion group.

DePerno also said he would prosecute Whitmer over a directive for hospitals to discharge seniors with COVID-19 into nursing homes that had isolation units. Republicans argue the policy needlessly put vulnerable seniors at risk and led to additional deaths from the virus. DePerno said Whitmer could be charged with misconduct in office, a felony.

“We will investigate and prosecute Governor Whitmer for what she did with the nursing homes,” DePerno said.

Berman and Leonard said they support investigations into the policy, but aren’t willing to commit to prosecuting the governor before an investigation is complete. Leonard said making such a pledge would actually hurt attempts to seek justice.

“In fact, if there were ever charges brought against that individual, I can tell you what the first thing is the defense counsel is going to do,” Leonard said. “They are going to play the videos of that attorney general on the campaign stump making political promises that they are going to arrest somebody and throw them in jail. That case is going to be thrown out or that person is going to be acquitted.”

Pothole season in Michigan: Tips on how to avoid and report potholes

Detroit is the home of many firsts. Recreational marijuana isn’t one of them

Will Michigan lower its tax rates? Here’s how we compare to other states.

Is 2022 another ‘year of the outsider?’ Michigan GOP gubernatorial candidates are banking on it.

One Detroit – The State of Immigration in Michigan