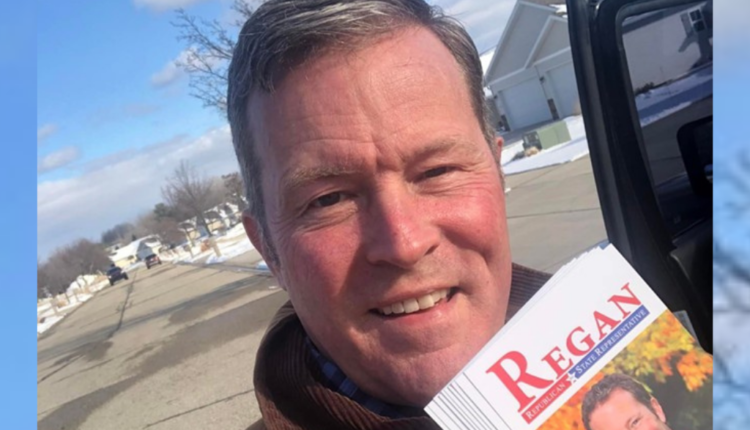 “This was a big, big win for … quite frankly, the RINO [Republican in Name Only] establishment, who’s proved beyond a shadow of a doubt that they would rather have a Democrat in office than an American-first Republican candidate like me,” Regan said on “Trucker Randy” Bishop’s radio show Wednesday.

Bishop, a longtime GOP activist who filed to run for state Senate as a Democrat, agreed and said there was a “coup” to make sure Regan didn’t win on Tuesday.

Regan faced backlash and lost some GOP establishment support during his campaign after saying that he tells his daughters “if rape is inevitable, lie back and enjoy it.” He also called the war in Ukraine “a fake war just like the fake pandemic,” and shared a meme claiming that feminism is a “Jewish program to degrade and subjugate white men.”

Right-wing talk show host Randy Bishop, a.k.a. “Trucker Randy” speaks at a right-wing rally calling for a so-called “audit” of the 2020 election at the Michigan Capitol, Oct. 12, 2021 | Laina G. Stebbins

Democrat Carol Glanville defeated Regan on Tuesday. She said the Republican’s “extreme, violent and antisemetic views” have no place in the House district that includes suburbs around Grand Rapids like Grandville, Rockford and Walker.

While speaking on Bishop’s show Wednesday, Regan said “establishment” Republicans are “trying to destroy” him.

In contrast, Regan said he and others like him are “street fighters” who “don’t mind getting dirty.”

“… You have to be willing to fight these people because they are downright evil, and they do not have our best interests at heart and they want to destroy our republic,” he added.

Regan also spoke at length about the long-debunked conspiracy theory that President Joe Biden did not rightfully win the 2020 presidential election.

“There is no way that Joe Biden won Michigan,” Regan falsely claimed.

Regan then claimed that he is in contact with active and retired “constitutional sheriffs around the state,” like Barry County’s Dar Leaf, who are planning to hold state officials accountable for widespread election fraud (which does not exist).

So-called constitutional sheriffs are anti-government, militia-friendly sheriffs that have openly declared their refusal to uphold state orders like guns at polls, COVID-19 orders and more.

“We’re working with the sheriffs and we’re working from the legal aspect to hold their feet to the fire because clearly, our RINO elected legislators, they’re not doing anything,” he said. Regan said he plans to connect with far-right commentator Dinesh D’Souza and “his investigators” to dig up evidence for the sheriffs.

He also said his supporters are planning to “take over” the Kent County Republican Party via precinct delegate elections on Aug. 2.

“There’s no room in our party for someone like him, advocating for violence against women,” Portela said, adding that Republicans will “win this seat back.”