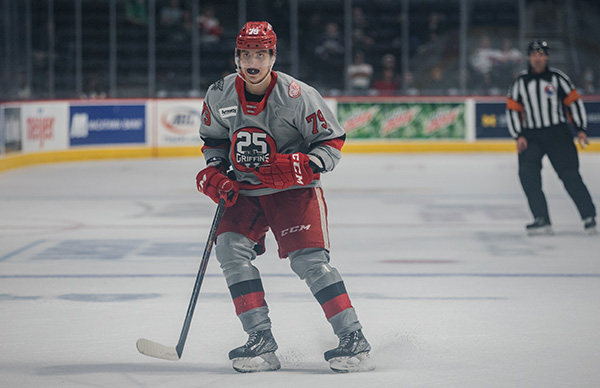 Red Wings of Tomorrow is assessing every prospect in the Detroit Red Wings system and what they are projecting to be in the future. We’ll be looking at the strengths and weaknesses of their game, as well as what the future holds for them as they advance through the Detroit organization. Today, we feature left wing Kirill Tyutyayev

Contract Status: One season on an AHL contract

Kirill Tyutyayev missed 67 games with the Griffins because of a shoulder injury that required surgery. But the Red Wings saw just enough of him to keep them interested in his development.

He didn’t look out of place in the Traverse City last fall. He showed his trademark offensive flair in the Prospect Tournament, scoring a pair of goals in the Red Wings’ 5-4 win against the Dallas Stars. On a minor-league contract with the Griffins, Tyutyayev registered two assists in his first American Hockey League game against Rockford.

Last October, former Detroit Red Wings coach Jeff Blashill said about Tyutyayev: “I like Kirill,. I think he’s got a good package. It doesn’t scream off the page at you, in terms of his size and skating and that, but when you really watch him play, he’s strong on the puck.”

That’s why the Griffins were willing to give Tyutyayev another one-year contract for the 2022-23. Think of it as a re-do of last season.

Tyutyayev is not your traditional seventh-round draft pick. There is something about him that makes you want to see more. There’s something special about his relationship with the puck.

He was a novelty when drafted because he didn’t weigh 150 pounds. But he’s now listed as 5-foot-10, 178 pounds. He might be over 180 now. Grand Rapids teammate Jared McIsaac notes Tyutyayev protects the puck well for an undersized player. He is still only 21.

The odds are against Tyutyayev. The Red Wings haven’t signed him. He’s playing on a minor league contract. But he’s still on Detroit’s radar.

But scouts saw him score 47 goals in 31 games when he was playing in a Russia junior league. In 2020-21, he registered 32 points in the Belarus League. He added 10 more points in the playoffs.

“He’s a smart player,” Raymond said. “He’s a bit unpredictable and I can imagine hard to play against.”