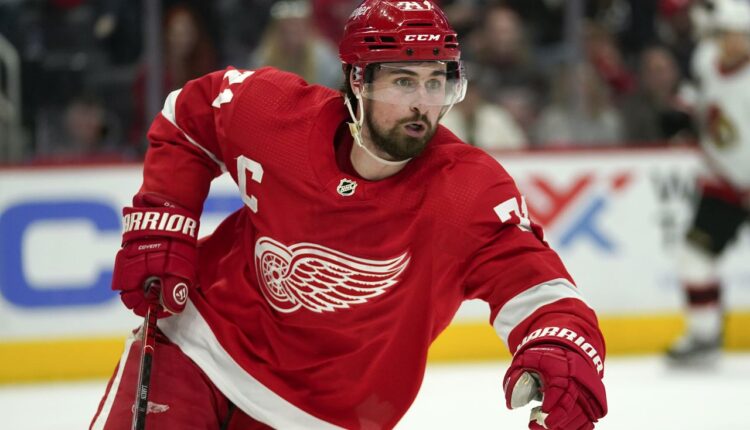 The past two seasons have ended in pain for Detroit Red Wings captain Dylan Larkin, and not just because of the team’s performance.

But while a neck injury late in 2020-21 drastically affected his offseason preparation, core muscle surgery with six games remaining in 2021-22 did not significantly alter his routine.

“I think the timing of the surgery was a difficult decision, but it was something we kind of mapped out where I could have a full summer,” Larkin said Thursday after the first day of training camp in Traverse City. “I was back in the gym right away. I was back on the ice eight weeks after. It’s just a great feeling not skating around with pain.”

He will feel even better after he signs a long-term extension. Larkin is entering the final year of a five-year, $30.5 million deal he signed in 2018 ($6.1 million cap hit). He said there is nothing to report on that front.

“I think it’s very important to get it done before next season so I can play hockey,” Larkin said, jokingly. “I don’t see myself playing anywhere else. It’s great to be back on the ice, great to be back in Traverse City with the guys so I can focus on our team.”

Not having an extension in place when the season starts won’t be a distraction for him.

“You get so caught up in the daily grind, the games, practices, recovery and preparation for the next game,” Larkin said. “Something I take very seriously is how I recover, how I prepare. It’s pretty much all I do all season. I plan on sticking to that and playing for the fans and my teammates.”

Larkin was excited by general manager Steve Yzerman’s flurry of acquisitions, which includes free agents Andrew Copp, David Perron, Dominik Kubalik, Ben Chiarot and Olli Maatta and goaltender Ville Husso, picked up via trade. But he cautioned the team must gel on the ice, especially with a new coaching staff headed by Derek Lalonde.

“We have to be a team that’s hungry,” Larkin said. “We can’t look at our roster and the acquisitions we had this summer and think that we’re going to make the playoffs, or think that we’re a great team, because we haven’t proved anything. I think we’re in the toughest division in the NHL. We’re going to have to be on our toes, play fast and be very hard to play against.

“We have to go out, have to a great camp … new systems, new coaching staff. We have to all get on same page pretty quickly and be full-go for Oct. 14 (season opener vs Montreal).”

Perron said Larkin called him right away after he signed.

“We talked for a while, some of the things the team wants to accomplish moving forward this year,” Perron said. “He’s ready to see this team go the right way. I’m impressed with how well he takes care of every individual, not only on the team but in the organization. He talks to everyone, is super nice, trying to include everyone. That’s something a leader needs to have.”

Lalonde said he and Yzerman talked about being cautious with expectations.

“We’re a long way from being where we think this can be,” Lalonde said. “But I think there’s some excitement, some optimism and (Larkin) feels that, too. He wants to win. He’s been through everything here the past seven years. Just like anyone else, we want to take that natural progression, whatever that looks like, in becoming better.”