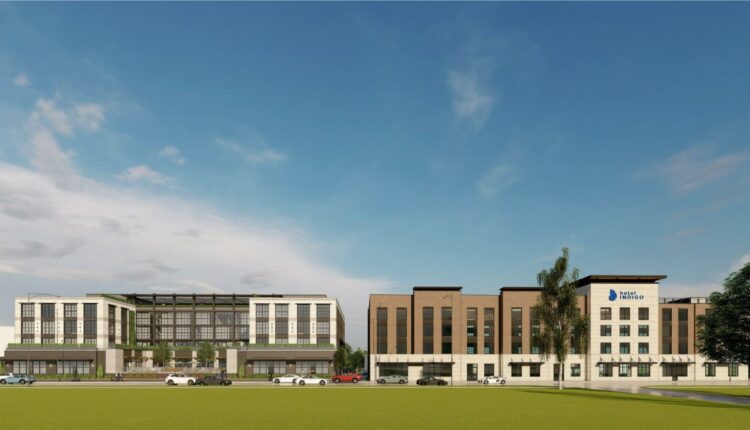 City planning commissioners voted 4-3 Wednesday to recommend changing the city’s zoning rules to allow for an extra five feet of building height beyond the 45-foot maximum in the C-4a district. The would allow the extra height under specific circumstances – notably the presence of amendment contaminated soil or other environmental conditions – with the approval of the planning commission. The change is intended to allow properties located on contaminated soil with high water levels – like the Hotel Indigo and a planned new Marriott hotel next door – to have a few feet of height flexibility so they can put parking and basements below-ground without disturbing the water table or risk losing the top floor.

The amendment was sought by Jeff Schmitz of JS Capitol Group, which is looking to build a new four-story Marriott hotel at 211 and 221 West Grandview Parkway. The parcels sit vacant between Hotel Indigo – which Schmitz developed before selling it to Procaccianti Hotel REIT, Inc. in 2018 – and the Traverse City Tourism building. Schmitz went before the city’s zoning board of appeals (ZBA) in April to seek a height variance of three feet, eight inches, which would make the new Marriott 48 feet, eight inches instead of the 45 feet allowed in the district. Soil analyzes identified extensive contamination and high water levels under the property. That means underground parking can’t be sunk down as deep as it normally could, pushing the entire building up further than it would be without those conditions. Accordingly, JS Capitol Group could potentially lose its top floor without a height variance due to historic contamination that wasn’t the developer’s fault, Schmitz argued.

Schmitz anticipated ZBA approval based on previous precedent in the district. While most City of Traverse City zoning allows 60-foot buildings, zoning districts closer to the water are more restrictive, with the intent of “stepping down” building mass nearer to the bay. Because of those restrictions, Schmitz had to seek a dimensional variance in 2011 to build Hotel Indigo, which the ZBA approved. The ZBA also granted variances in 2015 for the parcels where the Marriott is proposed for a different four-story development, which never materialized.

Still, while ZBA board members approved a rooftop variance for the new Marriott, they denied Schmitz’s request for a height variance. Some said the fact that properties in the area keep needing variances means that contamination and water levels are a widespread and not unique problem. Variances are meant to address conditions unique to a specific property; if variances are repeatedly requested across multiple sites, zoning practices typically call for updating the entire code, such as through a text amendment, rather than continuing to grant individual exceptions.

Based on ZBA feedback, Schmitz submitted a proposed text amendment to the city planning commission. In a memo to planning commissioners, City Planning Director Shawn Winter noted: “Since many of the properties downtown are constrained by environmental contaminants and high groundwater, such an amendment would make the development of properties in the C-4a district more viable without having to lose a floor on the top or incur expensive contamination treatment costs.”

Winter also noted that the text amendment doesn’t interfere with Proposal 3, the city charter amendment requiring a public vote on buildings over 60 feet, because the maximum height even with the amendment would only be 50 feet. Still, attorney Bailor Bell of the Jay Zelenock Law Firm – representing the new owners of Hotel Indigo – opposed the text amendment, saying that “city residents have clearly expressed their disapproval of taller buildings in the city” and that the presence of high water levels and contamination is not “new information.” As such, “Mr. Schmitz failed to demonstrate a practical difficulty allowing for a height variance and the same lack of practical difficulty also renders the requested zoning code amendment totally unnecessary,” Bell wrote.

After extensive debate, planning commissioners voted 4-3 to recommend the text amendment for approval to the city commission, with Planning Commissioners Mitch Treadwell, AnnaMarie Dituri, Debra Hershey, and Christopher Martin in support and Planning Commissioners David Hassing, Janet Fleshman, and Mark Wilson opposed. Planning Commissioners Heather Shaw and Jim Tuller were absent. Hassing and Fleshman questioned in their opposition whether developers have a right to underground parking and/or a fourth floor, believing confident sites are still buildable with the right design under current zoning regulations. Hassing said he believed the new Marriott was a “wonderful project,” but questioned: “Is it necessary to have a four-story building with underground parking to be a viable building site in Traverse City?”

For her part, Hershey worried that heavily contaminated properties will be “very expensive to build on” and will “sit there empty” without zoning flexibility to address the pollution. “As we look to the future, growth is going to happen,” she said. “I personally want to see these sites developed, cleaned up if they need to be, and flexibility is going to be key.” Anne Jamieson-Urena of the Grand Traverse County Brownfield Redevelopment Authority also said that – in part because of the exorbitant clean-up costs at Hotel Indigo, which the state helped cover – the Michigan Department of Environment, Great Lakes, and Energy (EGLE) will no longer cover dewatering clean-up costs related to construction. “It’s a different situation that we’re dealing with,” she said, adding that those costs are now falling to developers, many of whom are dealing with different forms of contamination and mitigation requirements than were present at Hotel Indigo.

The text amendment now heads to city commissioners for introduction on July 18, followed by an approval vote at a subsequent meeting. If passed, the new zoning rules would not mean Schmitz would automatically be cleared to build up to 50 feet at the new Marriott. Instead, the amendment requires the developer – and any others who seek up to five extra feet in the C-4a district – to come before the planning commission for a separate review process. To be approved for the extra height, developers need to demonstrate the presence of “subsurface soil conditions, including soil or ground water contamination, elevation of groundwater or other environmental conditions that impact the depth of subsurface structural or foundations systems, below-grade parking, or basements,” according to the amended language.