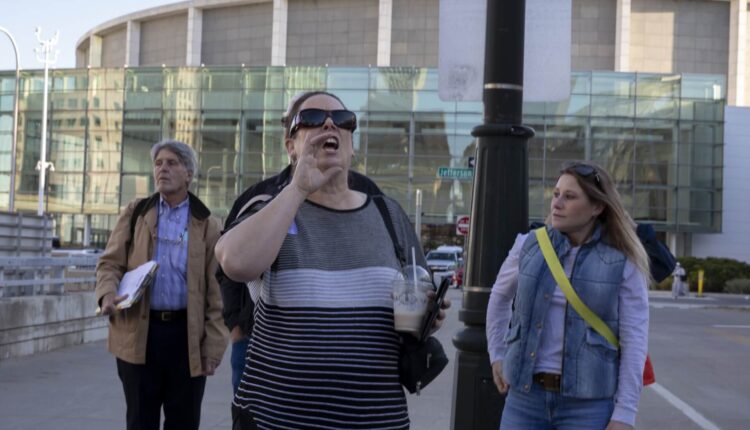 Joey Gilbert, a Reno-based attorney, lost the GOP primary for Nevada governor by roughly 26,000 votes in June, a margin of around 11 points. But he wasn’t ready to admit defeat.

Empowered by former President Donald Trump’s false claims of voter fraud after the 2020 election, Gilbert refused to concede. He offered a $25,000 reward to anyone who could provide evidence of fraud, lodged a legal challenge and filed for a recount.

Gilbert’s efforts were not successful. He couldn’t come up with any legitimate evidence of fraud, instead bringing before the court an amateur mathematician and a “geometric, mathematical analysis” which he claimed proved that the results as announced were a “mathematical impossibility.” Gilbert alleged that voting machines must have switched votes.

Your guide to the election deniers running in top Michigan races on Nov. 8

“I don’t understand it, but I think that was the point,” said Nevada election lawyer Bradley Schrager, who is known for representing Democrats. “It was literal mathematical gibberish.”

A judge shot down the suit and sanctioned Gilbert, ordering him to pay the Republican nominee nearly $88,000 in court costs.

But election experts say that other candidates may not be deterred by the fact that challenges to the results of an election are rarely successful, and that solid evidence is needed for a court to take them seriously.

Across the country, Republicans following in Trump’s shadow who deny the results of the 2020 election are running for prominent statewide offices, including governor and secretary of state. In Michigan, the entire GOP slate denies the results of the 2020 election that Trump lost: Tudor Dixon for governor, Matt DePerno for attorney general and Kristina Karamo for secretary of state. They are facing on Nov. 8 Democrats who do accept 2020 election results: Gov. Gretchen Whitmer, Attorney General Dana Nessel and Secretary of State Jocelyn Benson, respectively.

Many have already said they will not accept the results of their election if they lose. In some cases, the races may turn out closer than Gilbert’s, and prolonged, costly challenges could allow for the spread of misinformation.

“I am extremely concerned about the risk that candidates for all kinds of office will refuse to accept the results of their elections,” said Rachel Orey, associate director of the elections project at the Bipartisan Policy Center, a think tank that uses ideas from both parties. “The incentives are misaligned currently.”

Candidates know that denying results will generate publicity and help them fundraise for their party or for themselves, Orey explained. “The incentives are moving away from fostering trust in democratic culture and toward temporary political gain, which has extremely troublesome consequences for the future of U.S. democracy.”

Steve Simon, Minnesota’s Democratic secretary of state, is facing an election denier in November. Kim Crockett, the GOP nominee, has not committed to accepting the results of the election.

“It’s disqualifying for any office, but in particular for this office,” he said. “The office of secretary of state in Minnesota and in most states is about upholding the law when it comes to how we elect people to public office and it’s simply disqualifying for someone who wants to be in this office to thumb their nose at the law and preview an election denial campaign.”

Experts say they’re more worried about the consequences for democracy if election deniers win their races.

It’s not a new phenomenon that after losing an election, candidates try to see if there’s anything they can do to change the outcome. Recounts and lawsuits are all part of the electoral process.

But Schrager explained that what has changed in recent years is a symptom of how politics in the U.S. have become extremely polarized. Certain candidates aren’t able to live in a world where the other party has won an election. Instead of losing an election and then directing their energy to how to turn out the vote in the next election, candidates are instead turning to denialism.

“The election denier phenomenon is really just a symptom of this feeling,” Schrager said. “They cannot believe that this happened, it can’t have happened, their reality won’t permit them to live in that world, therefore it must not have happened.”

A candidate’s refusal to concede is not that significant, election experts said. Conceding has no legal value and is more of a custom that occurs along with the peaceful transfer of power.

In close elections, candidates have a right to request a recount, either paid for by themselves or public funds, depending on the state. They can also bring valid challenges to the courts, or even far-flung challenges if they’re willing to spend money and time on arguing points that courts will likely reject.

Simon said when he talks about accepting the results of an election, he includes a litigation period because it’s everyone’s option to go to court if they think something went wrong.

Audits are also a common occurrence to verify results, and the Bipartisan Policy Center recommends audits after every election. But Orey said when they are manipulated by candidates who deny the results, they have the opposite effect of what they’re supposed to do, which is to increase public confidence in the results.

While it doesn’t have legal consequences, refusing to concede can damage public trust in the electoral process. The period between the close of polls and the release of unofficial results is one of the most dangerous periods for the spread of misinformation, Orey said. How far they’re willing to go

In 2020, Trump exhausted all legal avenues, but was still not willing to accept the results. The U.S. House committee investigating the Jan. 6 attack on the U.S. Capitol has voted to subpoena Trump as the “central cause” of the insurrection.

Schrager said it’s candidates like Trump and his allies, who are willing to push violence, that concern him most.

Some election denier candidates running this year have close ties to extremist groups.

A few organizations are trying to protect against the threat of candidates refusing to accept the results of elections by asking them to sign pledges.

A coalition of groups including the Carter Center and the Election Reformers Network have put their names on the Principled Candidates Pledge, which asks candidates to agree to the “five core doctrines of democratic elections: integrity, nonviolence, security, oversight, and the peaceful transfer of power.”

Candidates on both sides of the aisle, from Republican Gov. Brian Kemp of Georgia to Democratic gubernatorial candidate Stacey Abrams and Republican Utah Gov. Spencer Cox , have all signed the pledge.

While the pledges aren’t likely to stop the staunch deniers, and deniers likely will emerge after the November election, experts say the real test will be whether the pattern continues past 2022.