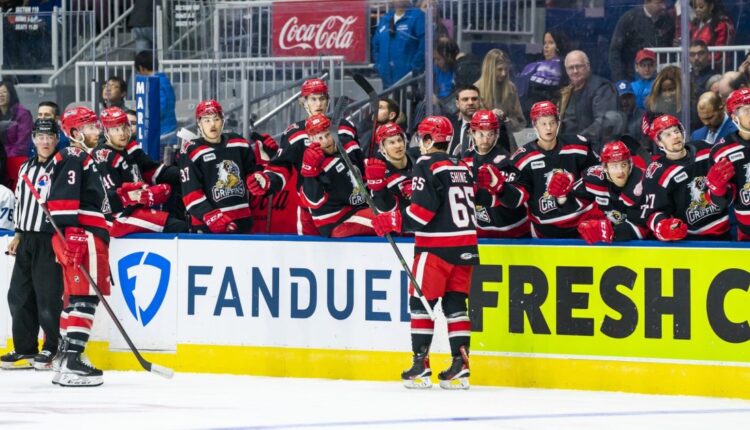 TORONTO – Three Griffins amassed multi-point outings, as the Grand Rapids Griffins bounced back in game two against the Toronto Marlies with a 5-2 win at the Coca-Cola Coliseum on Sunday.

Despite missing all but nine games a year ago, Kirill Tyutyayev has gotten off to a blazing start this season. Tyutyayev’s hustle plays created two scores for the Griffins on Sunday, upping himself to four total points (2-2—4) in as many games. Regardless of a mid-frame goalie change in the first, Grand Rapids held the Marlies to just two goals on 36 shots in the Griffins’ second contest of an eight-game road trip. Matt Luff (1-1—2), Taro Hirose (0-2—2) and Tyutyayev (0-2—2) all paced Grand Rapids in the contest.

Inside his own blue line with a broken stick, Tyutyayev ignited his squad by diving across the ice to deflect a puck toward Pontus Andreasson on a fast break. Andreasson had a look at goal but circled to his right and passed the biscuit to a trailing Donovan Sebrango on his left. Sebrango then rifled a shot into the upper-right-hand corner of the goal for an early 1-0 advantage at 1:37 in the first period. Victor Brattstrom (eight saves) drew the start at netminder for Grand Rapids but suffered an injury and was replaced by Jussi Olkinuora with 10:17 to go in the initial frame. The Marlies were able to tie it up on a power-play chance when Joey Anderson deflected a shot from the left circle into the cage with 2:20 remaining in the first.

Tyutyayev remained involved on offense in the middle frame, assisting on Dominik Shine’s snipe from the left circle into the bottom of the net at 2:55 on an odd-man rush.

Luff followed with a power-play goal on a wrister from the left wing on behalf of an Austin Czarnik apple to make it 3-1 at 8:37. After being held to 17 shots in their previous game against Toronto on Saturday, the Griffins surpassed that effort by the end of the second period with 20 total shots.

Entering the third on a power play, Anderson capitalized at 1:34 by sliding a puck through the five-hole of Olkinuora to cut the lead to one.

With the final result still in question, Kyle Criscuolo ended any doubt by deflecting a pass from Luff in the crease to go up 4-2 with 3:20 left. Forcing Toronto to pull its netminder at 17:00, Cross Hanas capped off the game with his third goal of the season on an empty netter with 54 seconds remaining. Olkinuora, in relief for Brattstrom, finished the game with 26 saves on 28 shots.

Note
– The goal and assist from Andreasson and Sebrango in the beginning frame was the first point for both players this season. The goal was also Sebrango’s second tally in his AHL career.
– Tonight was Olkinuora’s first win in the AHL since Feb. 15, 2015, and his eighth win overall in the AHL.
– With two assists on the night, Hirose has a team-leading five helpers on the season.
– Albert Johanson appeared in his 150th game as a pro.