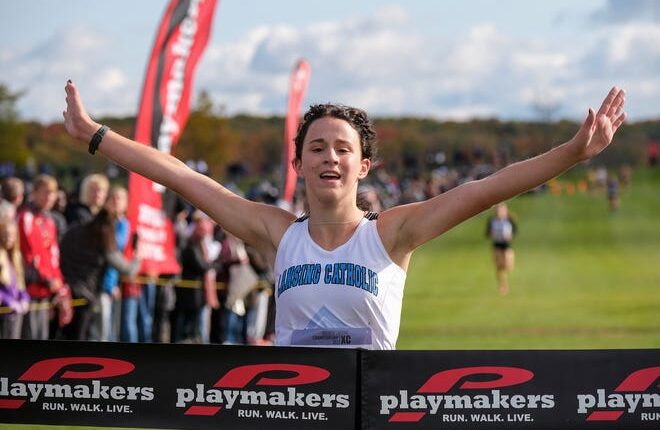 GRAND LEDGE − CC Jones has found things have worked out well when she’s gone out hard and dared others to follow suit.

So the Lansing Catholic senior decided to take that approach during the Greater Lansing Cross Country Championships on Saturday at Ledge Meadows Golf Course.

And that plan worked in her favor.

Jones finished as the individual champion at the annual meet with a time of 18:14.2.

“It means everything to me,” Jones said. “We have a school leaderboard that has their names on it and I know everything they’ve done and to continue that so-called legacy means a lot. Even Jaden Theis came out here and cheered us on and gave us a little pep talk so it means a lot.”

Jones had her best time of her junior season at Ledge Meadows during the Greater Lansing meet, finishing in 19:04.7. She said that gave her an extra confidence boost.

That confidence turned into Jones posting the second-best time of her career Saturday, which proved to be the latest strong moment in a senior season where she’s made strides.

“CC just has confidence and she just went out and got it and about halfway through (this race and) just pulled away,” Lansing Catholic coach Tim Simpson said. “She’s been training really hard and being smart about her training.

“She had a really good track season and carried that into her summer training and then this fall she’s kept it going and been consistently good and smart and not erratic.”

Jones lead a one-two finish for Lansing Catholic with senior Hannah Pricco being the race runner-up while helping the Cougars take third in the team standings. Jones hopes her second race win of the season can be part of a strong finish to her high school cross country career.

“My goal (this season) was to hopefully get into the low 18s and possibly break it,” Jones said. “I’m getting closer and closer each race. It’s coming, I’m hoping.”

Okemos captured his third straight team title at the event and finished with 102 points – 39 ahead of runner-up Alma. Junior Shannon Gillahan was seventh with a time of 18:58.14 to lead the Wolves, while Lily Salazar (15 th) and Nicole Mays (17 th) were also top-20 finishers.

“This is our third year in a row and at the beginning of the week we talked about the history of the meet and (for) John Quiring, who was the coach prior to myself, this was a big deal for him,” Okemos coach Brian Harrod said, “We talked about the history and how much this meet really means. I think we came in as probably the favorite and having that target on your back and still performing is a credit to the girls.”