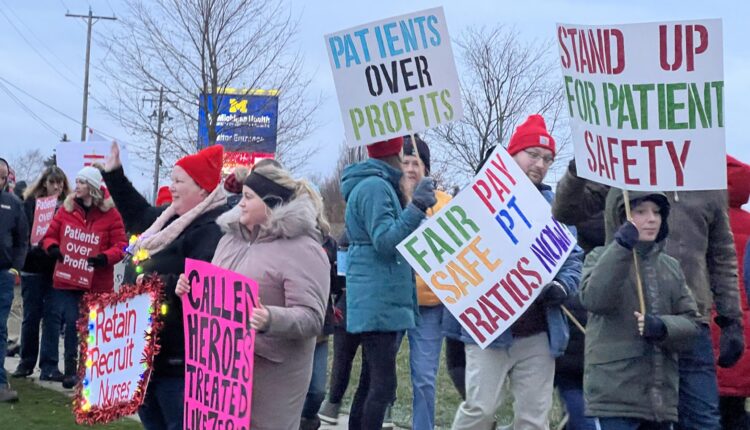 Years of deteriorating labor conditions and months of working without a contract have prompted nurses at two hospitals in mid-Michigan to hold strike authorization votes this week, union leaders said.

Approximately 150 nurses at MyMichigan Alma are holding their strike authorization vote Wednesday, and about 100 nurses at McLaren Central in Mt. Pleasant are set to vote Thursday, according to the Michigan Nurses Association (MNA). Nurses at both hospitals have been working under expired contracts since November.

“Nurses are rising up because we know that something fundamental needs to change in health care if we’re going to be able to keep our patients safe,” Shenan Shinabarger, a nurse at MyMichigan Alma and the president of the hospital’s local MNA bargaining unit, said in a press release. “Corporate executives need to be held accountable. By taking strong action together as a union, we are able to fight for what nurses and patients need.”

If approved, the strike authorization votes would allow the hospitals’ bargaining teams to call for a strike; the votes do not guarantee there will be a strike. The bargaining teams are made up of nurses who are democratically elected by MNA members at the hospitals to represent them in contract negotiations with hospital executives. A 10-day notice would be given before the beginning of a strike.

Nurses at both MyMichigan Alma and McLaren Central said they face similar challenges, including bad faith contract negotiations and increasingly burdensome working conditions — such as increased patient loads — that have been exacerbated by the COVID-19 pandemic. These conditions have pushed nurses from their jobs, union leaders said.

Marita Hattem-Schiffman, the central regional president of MyMichigan Medical Centers in Alma, Clare and Mt. Pleasant, said the hospital was “surprised to hear of the vote to strike following our most recent negotiations this past Friday.”

“We know our nurses, and they are exhausted from these past few years,” Hattem-Schiffman said in a statement provided Wednesday to the Advance. “The sacrifices they made through the COVID-19 pandemic are ones they are still recovering from today. They deserve our deepest appreciation and respect. Our very best efforts will never adequately recognize what they went through and what they contributed – the most expert and compassionate care – all the while fearing for our community, dreading what each shift might bring, and grieving the losses.”

But nurses at MyMichigan Alma are not receiving that appreciation or respect, workers said.

“Calling for a strike authorization vote is not a step we took lightly,” Shinabarger said. “This will be the first time I’ve done something like this in my life, but healthcare executives have left us with no other choice.”

A spokesman for McLaren, David Jones, provided a statement to the Advance on Wednesday that lambasted the nurses for the strike vote.

“It is unfortunate that MNA [registered nurses] decided to take a strike vote at McLaren Central Michigan, intending to take nurses away from patient care to strike for wages,” the McLaren statement said. “The timing of this vote coincides with the difficult time that all hospitals have had in recruiting and retaining nurses during the pandemic and is not a coincidence. This is an unconscionable attempt by select union representatives to use the pandemic as leverage at the bargaining table.”

Nurses said the strike vote is not meant to take nurses from patients, but rather to ensure that nurses remain at the hospital in the long run. That, nurses said, will allow for better patient care in the years to come. Too, union leaders said the trouble hospitals have had recruiting and retaining nurses during the pandemic is rooted in executives not providing incentives to attract or retain nurses at understaffed workplaces.

“McLaren’s CEO makes millions each year,” said Jessica Harradine, a nurse at McLaren Central and the president of their MNA local. “It’s time for this corporation to invest in our patients instead of executives’ bonuses.”

McLaren Health Care CEO Philip Incarnati’s pay increased from about $8.15 million in 2020 to $8.75 million in 2021, according to 990 tax filings with the Internal Revenue Service.

The McLaren statement went on to say that it remains “committed to bargaining in good faith with MNA for a new contract that continues to provide nurses with fair, competitive wages and benefits and allows our hospital to care for patients.”

“McLaren respects and cares deeply about our nurses and team members on the frontlines and wants to provide them the security of a long-term contract,” the statement said. “We have been bargaining in good faith with MNA since fall 2022 and have made significant progress on the terms for a new contract, including reaching multiple tentative agreements. We have four additional bargaining sessions scheduled.”

Should there be a strike, McLaren “will remain open and fully operational,” according to the hospital’s statement.

“We are implementing a comprehensive strike plan to ensure minimal, if any, disruption for those receiving care or visiting our hospital during MNA’s strike,” the McLaren statement said. “We have staffing safeguards in place to provide licensed, experienced temporary replacement nurses who will care for patients during the strike. We are prepared and committed to continually provide high-quality care for our community.”

Emily Burton, a McLaren Central nurse and member of the elected bargaining team, said the reason nurses are deciding whether or not to strike is because of “hospital executives’ disregard for federal labor law and to win a fair contract.

“For too long, we have seen McLaren executives prioritize their profits over our patients,” Burton said Wednesday. “Personally speaking, I am so exhausted by the toll that the staffing crisis has taken that McLaren’s threats and bullying tactics don’t scare me anymore. Nurses all across the country have risen up to hold CEOs accountable. Tomorrow, my coworkers and I will decide whether we want to do the same. I am scared that if we don’t take strong action now, things will only get even worse in the years to come.” “Nurses are leaving the bedside because the conditions that hospital corporations are creating are unbearable,” Michigan Nurses Association President Jamie Brown said. “The more nurses leave, the worse it becomes. This was a problem before the pandemic, and the situation has only deteriorated over the last three years. Nurses are realizing that the only way to change this downward spiral is by refusing to accept it anymore.”

Union representatives pointed out the problems at the central Michigan hospitals are emblematic of a nationwide issue: Burnt out by skyrocketing patient loads during an ongoing pandemic, nurses throughout the country are increasingly leaving their jobs and going on strike to call for safer working conditions.