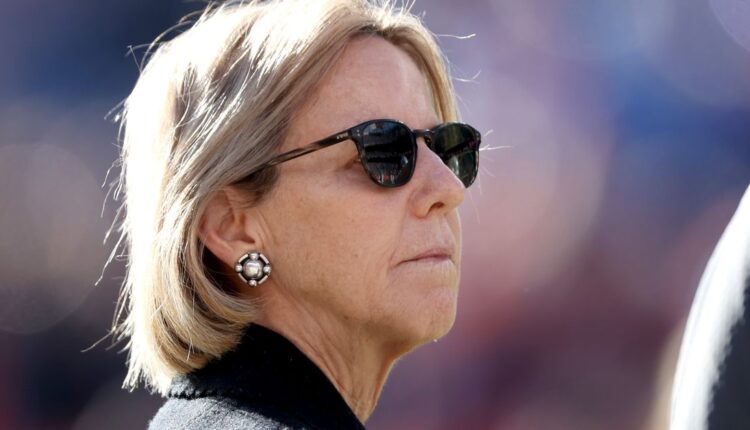 There hasn’t been a less popular job in the past few decades than Detroit Lions owner. The Ford family has faced a lot of understandable criticism for their failure to turn the Lions into a winner for the better part of a century. This team won just a single playoff game in the Super Bowl era, and their last championship came in 1957. To say the Ford family and Detroit football fans have a tenuous relationship is a bit of an understatement.

However, the era of Lions football under Sheila Hamp—daughter of the previous owners Martha Firestone Ford and William Clay Ford Sr.—has started to shift the narrative a bit. She replaced Martha as team owner back in June of 2020, and after just a few months on the job, she was forced to fire both coach Matt Patricia and general manager Bob Quinn (wildly popular moves at the time).

Since that moment, she’s been building the team in her own vision. That’s not to say she isn’t responsible for some of the team decisions before then—she was actively involved during her mother’s six-year reign on the job. However, she has been the primary decision-maker since then, and there has been a lot of good will built up.

She spearheaded a more thorough head coach and general manager search than previous regimes. She shook up the organizational power hierarchy by adding a football voice in Chris Spielman to leadership. She has preached partnership in all facets of the business—even moving her office at Allen Park to be right in the middle of the action.

Another tent pole of the organization has been transparency. While much of that has been courtesy of her first coaching hire Dan Campbell, she’s lived up to that promise, as well. She’s provided a few one-on-one opportunities to meet with the media, and when the Lions started out a disappointing 1-5 to the 2022 season, she recognized the moment as something that needed to be addressed publicly and took the initiative to show her face.

In that October media session, she preached patience and confidence in the current regime. It was a message that some fans didn’t want to hear, but most appreciate the gesture. Of course, the team almost immediately turned the corner, proving many of the things she said that afternoon to be correct.

This offseason, she’s already off to a decent start. Previous owners have been accused of not caring about the franchise, looking only to score a profit. However, Hamp has now done two things to show her commitment (both mentally and financially) to the team’s success. When players vocally complained about the turf at Ford Field, she jumped to action to replace it with a (perceived) safer option this month. And when it looked like offensive coordinator Ben Johnson was surely lost to the Carolina Panthers, she opened up the pocketbook and gave him a “large” raise.

Of course, all of these things have yet to produce results. A 9-8 season is a big, successful jump from 3-13-1, but it’s far from where this franchise wants to be. And because of that, some will remain understandably skeptical of Hamp. We’ve seen this franchise reach mediocre levels plenty of times throughout its history. Does Hamp and company have it in them to make this team a consistent, long-term competitor capable of finally brining a Lombardi Trophy to Detroit?

That question remains far from answered.

But for now, let’s see where you stand on Hamp’s ownership. After 2.5 years, do you approve of the job Sheila Hamp is doing as Lions owner? Vote in the poll below:

What grade do you give Sheila Hamp for her first 2.5 years of Lions ownership?