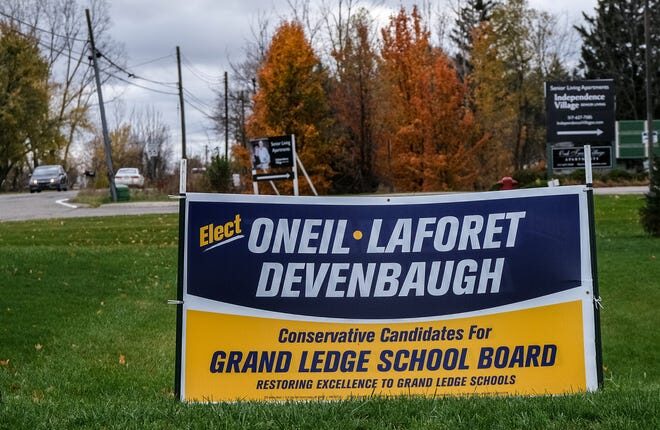 LANSING − With less than a week until the Nov. 8 election, there’s nothing unusual about seeing signs promoting school board candidates on properties along M-100 in Grand Ledge − but the signs urging voters to support Ashley Oneil, Kim Laforet and Jason Devenbaugh stand out.

In a non-partisan race for the school district’s Board of Education, their joint campaign signs label the trio as “Conservative Candidates for Grand Ledge School Board.”

Oneil, Laforet and Devenbaugh have embraced the description.

In August, after the Grand Ledge Education Association asked all three to fill out a questionnaire that would be used to determine the teachers’ union’s endorsements for school board, they declined.

In a joint written response, Oneil, Laforet and Devenbaugh said they were not seeking the union’s endorsement.

“…given the philosophy of our candidacies, we feel that an endorsement by the GLEA would actually run counter to our platforms and alienate our voting base,” it read.

And in September, Linda Lee Tarver, a Republican candidate for Michigan’s Board of Education, moderated a “town hall meeting” with Oneil, Laforet and Devenbaugh at the Grand Ledge Area District Library. During the nearly two-hour event, all three discussed concerns about school mask mandates, “pornography” in school libraries and allowing transgender students to use the school restroom of the gender with which they identify.

The Grand Ledge race is just one example of the partisanship that’s become a part of school board races throughout Greater Lansing and the state. Experts attribute the trend, at least in part, to a pattern of nationalization that’s framing many local races in the image of national politics.

Cultural debates rooted in partisan politics have become a big part of this November’s school board races, even though the average voter still pays very little attention to them, said Matt Grossmann, director of the Institute for Public Policy and Social Research at Michigan State University.

“I’ve never seen anything like it,” said Don Wotruba, executive director of the Michigan Association of School Boards. “I like a lot of people being engaged, I just hope once it hits January … they change their focus to governance and not politics.”

A ‘new normal’ for school board elections?

Grand Ledge candidates Oneil and Laforet both declined requests for interviews from the State Journal. Devenbaugh did not respond to messages or an email. All three would be newcomers to the board.

All three have been regulars in attendance at Grand Ledge Board of Education meetings this year, raising concerns about everything from claims that there are litter boxes in school building bathrooms for student use to the presence of Black Lives Matter and Pride flags in classrooms.

Devenbaugh filed a civil rights complaint against the school district in June, claiming school board members and a former superintendent didn’t respond when he asked to meet with them. In it, he said he believes he couldn’t get a meeting because he is white.

“Jesus said in Matthew 18, 5 and 6, whoever receives one such child in my name receives me, but whoever causes one of these children who believed in me to sin, it would be better for him to have a great millstone fastened around his neck and be drowned in the depths of the sea,” Laforet told officials at the Oct. 24 Board of Education meeting. “That’s a strong admonition for those on the school board, administrators, teachers and parents. If we are allowing policies to be put in place that give our children no hope, sexualize them at a young age and teach them to seek vengeance instead of justice we are putting our children on a path of hopelessness.”

Laforet is running for a partial term against Toni Glasscoe, who was appointed to the seat earlier this year. Oneil and Devenbaugh are running for two available six-year terms, along with incumbent Denise Dufort and newcomer Ashley Kuykendoll.

Dufort, Glasscoe and Kuykendoll have been endorsed by the Grand Ledge teachers’ union. They have campaigned together but say they are running separate races and are not declaring partisan labels.

“School board positions are not partisan, should not be partisan, and we should not approach our work from the left or the right,” Glasscoe said.

Bill Ballenger, a longtime Michigan political pundit and former Republican state legislator, said Slotkin’s endorsement of a candidate in a local school board race speaks to the broader trend of partisanship in what are considered non-partisan races.

“It’s a sign,” he said. “It’s a manifestation of the increasing partisanship of these races but again, how far is it going to go? What are we going to see in future years? I am beginning to think it is the new normal. The question is, how much of a new normal?”

In the Mason Public Schools Board of Education race, there are no candidates running as Democrats or Republicans, but Bryan Droscha, running in tandem with Bethany Walter, said it is clearly a partisan race. He pointed to partisan endorsements being made, including endorsements from Ingham County Clerk Barb Byrum, a Democrat.

Droscha, a Mason alumnus whose grandchildren attend the school system and who considers himself an independent, did not receive an endorsement from Byrum. Neither did Walter.

The Mason election features nine candidates, including incumbents Liz Evans and Matt Hall, running for three spots on the board. The large number of contenders illustrates concerns in the community and the desire by some to address those concerns at the school board level, Droscha said.

The school district has tried to “take parents out of the equation,” Droscha said, and isn’t being completely transparent with parents.

Walter could not be reached for comment. In a Facebook post she referred to questionnaires reportedly handed out in classrooms concerning gender ideology or sexual orientation for students to complete without parental consent, asking students if they would want the teachers to avoid sharing that information with their parents or guardians. Walter wrote that it appears to be a violation of school board policy.

Walter appears to be referencing a questionnaire for students, which has been shared on Facebook, asking students their name, what name they would like to be called by and their preferred pronouns. At the bottom, students are asked if they can be called by their written names and pronouns in front of the class or other students, when the teacher calls home and in front of other teachers and staff.

Potentially keeping information away from parents is an example of communication that needs to be improved between the school district and parents, Droscha said. It’s an issue he and Walter say they wish to improve.

Droscha said they also have concerns about how the school district handled the COVID-19 pandemic. Some COVID-19 health and safety measures taken in Mason Public Schools were controversial, including in August 2021 when the board voted 4-3 to require masks for all students and staff inside the school buildings at all times. The meeting ended with Ralph Beebe, then the board’s treasurer, resigning.

Walter has shared her frustrations with the mask requirements several times, including to the board, before the requirement was eventually lifted in February.

Evans said it saddens her to think residents and parents like Droscha and Walter believe the schools aren’t being transparent or were mismanaged by the district during the pandemic. She defended herself and the board’s actions.

“There was nothing easy about that time. Nothing was easy,” she said. “No school board was given the book as to how to maneuver or govern a school district at that time. I have full faith that our district, together with the board, used the guidance that was given to us.”

Making sure that kids remain the top focus

Much of the partisanship in local school board races can be traced back to parent concerns about COVID-19 policies and decisions school officials made during the pandemic, Grossmann said.

“Once people started paying attention to those decisions of local school boards they tended to expand their interests into these other kinds of concerns that were arising at the same time,” he said.

Every school district in the US had to respond to the COVID-19 pandemic in some way. It quickly became politicized nationally and, as a result, so did the decisions that school boards made to protect their students and staff.

But just like COVID-19, most school districts across the country have had to respond to a group of very similar issues, including claims that critical race theory – or the study of how racism permeates institutions – is being taught, school curriculum, and books in school libraries that some claim are inappropriate for students and should be removed, said Evan Crawford, an assistant professor in the Department of Political Science and International Relations at the University of San Diego.

But that’s not necessarily a bad thing. A clearly partisan school board race presents voters with more information they can use when deciding for whom to vote, Grossmann said.

“It turns out that party tells you a whole lot about the likely beliefs, priorities, and perspective and background of candidates,” he said.

What can’t get lost amid the battle of parties, beliefs and priorities are the students, Wotruba said.

Election and school board experts agree this is one of the most significant school board election years in decades and the results could eventually leave an impact on public education.

“I just hope that as policies are made, kids aren’t hurt in the process, that would be our biggest fear,” Wotruba said. “Just making sure that kids remain the top focus of everyone who gets elected.”