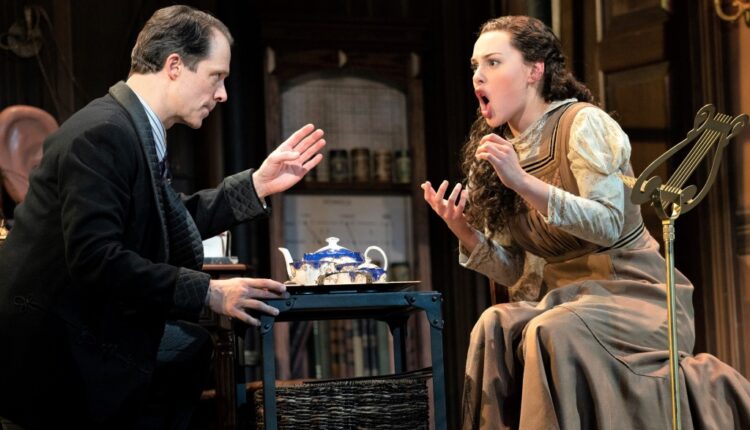 The much-loved Lerner and Loewe musical “My Fair Lady” arrives at the Detroit Opera House July 12 to 24 with a modern spin on the ultimate make-over story.

The Lincoln Center Theater’s revival was itself nominated for 10 Tonys, including Best Musical Revival.

The show is filled with sumptuous sets, beautiful costumes and the songs theatergoers love – including “I Could Have Danced All Night,” “Get Me to the Church on Time,” “Wouldn’t It Be Loverly,” “On the Street Where You Live,” “The Rain in Spain” and “I’ve Grown Accustomed to Her Face.”

As delightful as the story about the transformation of a Cockney flower girl into an upper-class English lady is, the phonetic transformation is only one part of the story, and the likelihood of Eliza falling for Professor Henry Higgins, as clueless and condescending as he is, does not ring as true with modern audiences as it did in 1956 when it first opened on Broadway.

The revival’s director, Bartlett Sher, said chose to focus more on Eliza’s story than on Henry Higgins, as noted in an article on Broadway in Detroit’s playbill.

Sher said that “My Fair Lady” is more than a Cinderella story, and that Eliza is the driving force. She wants to be able to speak well enough to work in a flower shop, and she works extraordinarily hard – despite Henry Higgins’ rudeness, bullying and lack of basic social skills – to succeed in achieving her goal.

Lerner and Loewe’s “My Fair Lady” plays at the Detroit Opera House July 12 to 24, with Shereen Ahmad as Eliza Doolittle. For more information, go to BroadwayInDetroit.com. (Photo courtesy of Joan Marcus)

Sher, who has directed revivals of the musical classics “South Pacific” and “The King and I” tries to convey the story to audiences with a fresh perspective.

In Shaw’s “Pygmalion,” the leading lady does not return to her teacher. In the revival of the musical – spoiler alert – after Eliza and Higgins exchange their closing lines, she leaves his house.

“She is going into the future,” Sher said in an article in Broadway in Detroit’s playbill. “It doesn’t mean they’re not going to be close. But in this day and age, we can’t suggest she has no agency over her own life.”

The revival director contends that Eliza taking responsibility for her own future resonates with younger audiences.

“Young women coming to see the show now have the chance to engage with one of the great characters in dramatic literature and musical theater history and see how powerful and extraordinary a model she is – and that’s very special.”

The 7:30 pm July 17 show will be a special open caption performance.

For up-to-date COVID protocols, go to BroadwayInDetroit.com. Currently, guests are no longer required to wear a mask in the venue, but are encouraged to do so. In addition, proof of full COVID-19 vaccination or a negative COVID-19 test are no longer required. However, the theater reserves the right to change its protocols based on the latest CDC guidelines, as well as local government regulations and the protocols of the presenting partners.

Tickets start at $25, and are available at the Fisher Theater box office, by phone, at 800-982-2787, or at TicketMaster.com. For more information or group sales, go to BroadwayInDetroit.com.