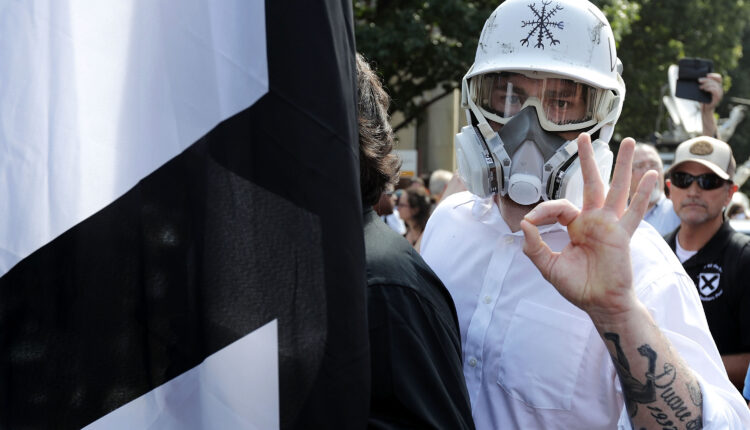 The leader of a national white supremacist group was sentenced Tuesday in Michigan on civil disorder charges.

Tuscola County Circuit Court Judge Amy Gierhart ordered Justen Watkins, 25, of Bad Axe to a term of 32 months to 4 years in prison for conspiring to train for a civil disorder and a mandatory consecutive 2 years for felony firearm. Michigan Attorney General Dana Nessel said that one of the charges filed against Watkins – conspiring to train for a civil disorder – marked the first time a defendant has faced the felony in Michigan’s history.

Authorities say Watkins helped lead a group known as The Base, which reportedly ran a “hate camp” for members, where he led tactical and firearms training for participants with the goal of being prepared for the violent overthrow of the government.

The cases were the result of a joint investigation by the Michigan State Police (MSP) Caro Post and the Federal Bureau of Investigation (FBI) Joint Terrorism Task Force (JTTF).

Charges against Watkins were initially filed in October 2020, along with a co-defendant, Alfred Gorman, in connection to a December 2019 incident in which authorities say a Dexter family was “terrorized at their home after the men used intimidation tactics and posted messages to other members of The Base targeting the home.”

After those charges were filed, investigators found evidence that Watkins and two other members of The Base – Thomas Denton and Tristan Webb – entered two former and vacant Michigan Department of Corrections (MDOC) sites in Caro to assess them as potential future training grounds for “hate camps”, which is what the group named their paramilitary firearms training exercises.

The tragic event in Buffalo that resulted in 10 people being murdered and another three injured is an example of why we must prosecute and pursue these types of crimes to deter others from contemplating such acts of violence.

Webb pleaded no contest last week to gang membership, conspiracy to train with firearms for a civil disorder and felony firearm. Authorities say the larceny in a building charge will be dismissed as part of the plea. Watkins, meanwhile, pleaded guilty last month to gang membership in Washtenaw County and will be sentenced there June 13 on that count.

Gorman, who was only charged in Washtenaw County, pleaded guilty to gang membership and was sentenced Feb. 28. He received four years of probation. The other charges were dismissed.

“The tragic event in Buffalo that resulted in 10 people being murdered and another three injured is an example of why we must prosecute and pursue these types of crimes to deter others from contemplating such acts of violence,” said Nessel.

“Securing these convictions on the conspiracy to train for civil disorder creates a historic precedent in our state’s court system and conveys the real danger domestic terrorism poses here and around the country. Today’s sentencing is recognition by the court of the serious nature of these crimes and demonstrates the willingness of our justice system to hold accountable those who commit crimes in the name of overthrowing our government or perpetuating racist ideologies. I appreciate the work of our law enforcement partners at all levels to help bring these criminals to justice.”

Founded in 2018, The Base – which translates into “Al-Qaeda” in English – has been labeled by authorities as a “white supremacy gang” that openly advocates for violence and criminal acts against the U.S., and purports to be training for a race war to establish white ethno-nationalist rule in areas of the U.S., including Michigan’s Upper Peninsula.

According to Nessel’s office, the group also traffics in Nazi ideology and extreme anti-Semitism.

The Blackfeet Nation’s Plight Underscores the Fentanyl Crisis on Reservations