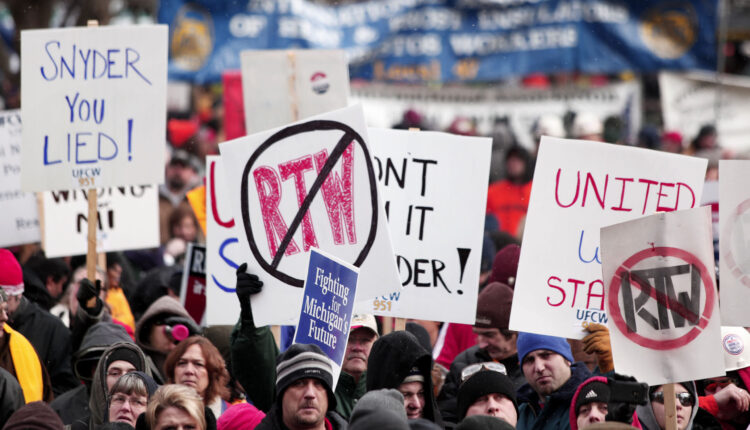 Four decades ago, former Gov. George Romney reportedly had some wise words for Republican John Engler at his gubernatorial inauguration: “Be bold.”

Bold Engler was, steering Michigan ever-rightward through the 1990s with an agenda cutting business regulations, ushering in school choice while demonizing teachers, and slashing the safety net. But the culmination of Engler’s vision came a decade later with centrist (wink) GOP Gov. Rick Snyder, who doubled down on such measures and signed Right to Work, sending a message that Republicans would go after labor even in the birthplace of the UAW.

While both men were lauded by opinion-makers for their cunning while in office, they’re now considered disgraces by those with a conscience — Engler for mocking sexual assault survivors while running MSU during the Larry Nassar scandal and Snyder for presiding over a major city being poisoned.

Now Michigan is in a place many talking heads never imagined in 2023, with Democrats easily maintaining every top executive post, a majority on the Supreme Court and even flipping both houses of the Legislature for the first time in almost 40 years, among other victories.

The blue blowout was an even more impressive feat because the party that controls the White House is supposed to get trounced in midterm elections, the economy has faltered and there’s still a pandemic (even if everyone pretends there’s not). That’s how Snyder and Republicans were swept into power in 2010 — it was a vote against President Obama amid frustration with the Great Recession far more than a deep-seated love for tea party politics, as Michigan going blue in 2012 proved.

That’s why Gov. Gretchen Whitmer — who led the fight against Right to Work in 2012 as the Senate minority leader — needs to finish the job early this year by signing its repeal.

There’s no shortage of issues to take up (the has a handy, extremely detailed guide if you missed it), but here’s why Right to Work should be at the top of the list.

Under a cloak of moderation, Snyder had already helped move Michigan backward on a number of fronts before he flip-flopped and signed RTW (which he famously had said wasn’t on his agenda). The Republican pushed through business regulation cuts that hurt the environment, as well as a giant corporate tax cut and balanced the books by raising taxes on working-class families and seniors. He also championed a draconian emergency manager law that paved the way for the health catastrophe in Flint.

But Right to Work was a turning point in Michigan politics.

There’s a reason why far-right figures like Steven Crowder showed up at the pro-union protest of roughly 12,000 people. Republicans had a disappointing election where they lost seats in the state House, U.S. Sen. Debbie Stabenow (D-Lansing) crushed it and Obama took the state by almost 10 points over former Gov. Romney’s son, Mitt.

GOP leaders and their biggest patrons, the billionaire DeVos family, were furious.

Ramming though Right to Work with no hearings — and trying to shut the public (and even some reporters like me) out of the Capitol — was more than a GOP temper tantrum against unions and Democrats. This was about wielding power to hurt people who lack it — which has become the hallmark of Republican governance in the decade that’s followed.

There’s been a steady stream of condescending takes from conservative columnists and business executives warning Whitmer and Democrats that they can’t be bold.

If there’s anyone who understands how unjust and unAmerican that idea is, it’s Gretchen Whitmer. As a lawmaker, she fought for LGBTQ+ rights long before it was widely popular. She brought “The Vagina Monologues” to the Michigan Capitol to protest her female colleagues being silenced by Republicans in abortion debates. And after fighting RTW, she told me during the first year of her governorship that she would “love” to sign a bill repealing it.

Whitmer has a perfect opportunity Wednesday night in the first State of the State speech of her second term to tell Michiganders: Right to Work has got to go.

After all, there’s no real evidence that RTW has helped Michigan’s economy. Wiping the law from the books would send a strong message to Michiganders who have put it all on the line in the last couple of years for better working conditions, pay and benefits, from striking workers at Kellogg, to nurses working for months without a contract at Michigan Medicine to workers unionizing at Starbucks and Chipotle.

They deserve a governor and a Legislature who will stand up for them.

There’s been a steady stream of condescending takes from conservative columnists and business executives warning Whitmer and Democrats that they can’t be bold. (Apparently Romney’s advice is just meant for Republicans and it doesn’t matter that a strong majority of voters wanted progressive policy).

But the bravado masks fear.

That’s because powerbrokers know that Whitmer has the same advantage that Engler did when he became governor: She paid her dues in the Legislature (usually letting Republicans slap their names on her bills so they’d pass) and spent years carefully observing how the other party functions. 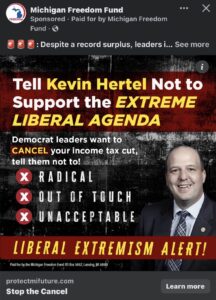 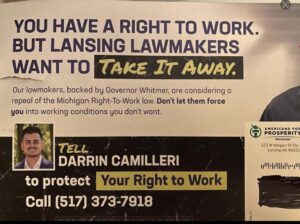 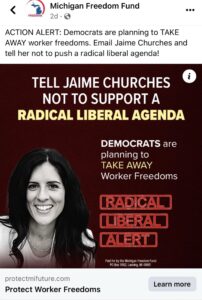 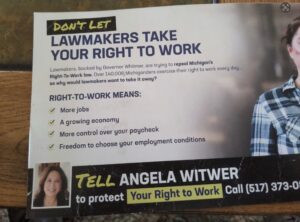 A mailer targeting Democratic lawmakers on Right to Work repeal

More than any other state official, Whitmer knows how to get things done. She also knows how to make her case (in her ultra-Michigander accent) to the public — which is why she won reelection in a landslide during such turbulent times.

That’s terrifying to insiders who want a dysfunctional Michigan, where the powerful thrive and the rest of us are left holding the bag.

Democrats have narrow majorities in both chambers and are staring at an enormous amount of legislation that hasn’t seen the light of day in decades. But there’s no reason why they can’t take on several key priorities at once, like repealing the 1931 abortion ban, improving public education, protecting LGBTQ+ rights and strengthening workers’ rights.

It’s clear that scuttling the RTW repeal is job one for right-wing groups and lobbyists who have already launched comically bad ads. If they succeed, Democrats will send a terrible message to their constituents that they’re too scared to take on special interests.

Indecisiveness and weakness usually aren’t rewarded at the ballot box. When it comes to politics, fortune favors the bold.