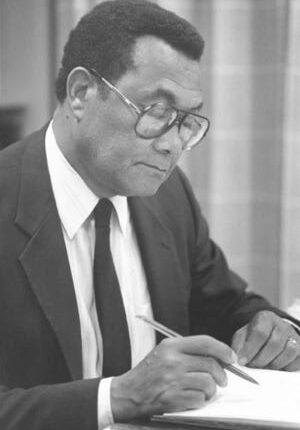 Matthew Prophet, Jr., who led Lansing schools as the district integrated during much of the 1970s, believed all children could succeed, said Robert Green, a former Michigan State University dean.

Prophet died in California on Sunday. hey what 92

Prophet was a no-nonsense man great kindness and empathy, said Diana Rouse, who was recruited during his tenure as a Lansing teacher in the early 1970s from Wilberforce University, a historically Black university in Ohio.

She was one of many teachers who were recruited in Prophet’s early days in Lansing; he was at the front of a push to get black teachers in every school.

“He was instrumental in carrying out that plan, part of that was recruiting minorities to come here and put them in positions of responsibility,” said Rouse, who would rise to principal of Gier Park and Maple Grove schools before working as a district assistant superintendent .

“There was a lot of strife, there were difficult PTA meetings, it was the unknown that people were being afraid of,” Rouse said.

It was a turbulent time with many opponents of integration and a steady man like Prophet made a real difference, said Green, who was the first Black dean at Michigan State University.

“Lansing had a problem with desegregation, it was a big issue,” Green said. “He did not take no for an answer when it came to holding low income and minority students in high esteem and with high expectations for their achievement. I recall Matt in a meeting. The question was raised, ‘What about these poor kids not doing well and pulling our test scores down?'”

Rouse, who had a front-row seat as a teacher and administrator, said Prophet’s approach made a success.

She and other new teachers recruited out of college felt comfortable dealing with a difficult situation because they had Prophet’s support, she said.

“His legacy was one of growing, being strong and standing by your beliefs,” Rouse said.

She credits a big part of her own no-nonsense but caring approach to the model set by Prophet.

As a school administrator, he left a checklist, alphabetized, with 105 “management factors” for urban school administrators who followed in his footsteps. It starts with administrative effectiveness and ends with widespread understanding of instructional goals, with student learning singled out as the top priority.

The checklist, like his approach to much of life, was meticulous, said Tony Prophet, his son.

Prophet was raised in the Depression era during segregation in a small Mississippi town, Okalona (population today 2,600). He went to Howard University and was drafted into the US Army without a degree.

He served in the Korean and Vietnam wars, leading soldiers in combat and working his way up to lieutenant colonel, the rank he retired with after 20 years of service. Much of his military career, outside of combat, was spent educating others and pursuing his own education at night.

He joined the Army with no degree and around the time he left in 1971, he had earned his PhD.

He was hired as a deputy superintendent for Lansing Public Schools in 1972. He spent several years as an adjunct professor at Michigan State University.

In 1978 he was named superintendent.

Perhaps his greatest success was his marriage, his son said, of 63 years to his wife, Freddye Adams Prophet.

She died in 2017. She was a teacher and activist who was involved with The Links, a community service organization, as well as a board member for the March of Dimes and a Portland hospital system in Oregon.

Prophet, with his small town roots, was likely drawn to larger urban schools because that’s where the challenge was and he could make a bigger difference, his son said.

In Portland, Prophet met Jimmie Jones, a retired US Army colonel, and the two bonded over military and education. Prophet helped Jones get into classrooms for an experimental program that linked Pentagon education lessons to a public school in Portland.

“I had never seen a superintendent at that level able to communicate about some of the basics and get down to the nuts and bolts and discuss and talk about it,” Jones said. “He was so successful, it was because he tied into not just the board and the school, but the entirety of the community.”

Jones wrote a book about Black generals in the US military in which he profiled 69 generals who served from 1968 to 1992, including Colin Powell.

“I thought if you met the average person on the street, how many African American army generals do you know,” Jones said.

Most people, he said, will say Colin Powell but not know the large number of Black generals and still larger number of Black officers who served, a group that includes both Jones and Prophet.

Prophet, and his children, had made a habit of giving Johns’ books out and the books made their way into Powell’s hands.

“I didn’t ask Matt Prophet to promote it for me, he did that,” Jones said. It’s the kind of behind the scenes friendship and advocacy Prophet gave throughout his life, his friend said.

“All I can say,” Jones said, “is Matt Prophet and his wife have been very good friends and very influential leaders in any community they have lived in.”

Please subscribe to the Lansing State Journal at lansingstatejournal.com/subscribe

Mike Ellis just moved to the Greater Lansing area after 14 years as a journalist in South Carolina. He was born and raised in the Metro Detroit area, and graduated from Central Michigan University. Since he’s been away for a while, send him an email and set up a time to tell him everything he’s missed. Ellis is always looking for the next story that people need to read, please send any tips or feedback to [email protected]