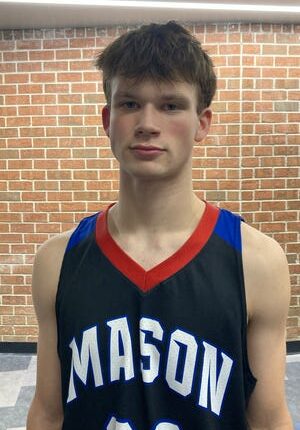 MASON — Cason Carswell led all scorers with 24 points to help guide the Bulldogs to a key CAAC Red win over Eastern. Levi Stambaugh notched 13 points and dished out six assists for Mason (8-2, 4-0). KyRen McKnight finished with a team-leading 16 points for the Quakers (3-5, 3-1). JV score: Mason 72, Eastern 35

Luch Guerrazzi had a team-high 20 points for the Cougars in their CAAC White victory over Eaton Rapids. Jack Jacobs had 17 points for Lansing Catholic, which won its second straight.

PINCKNEY — Bryce Kurncz led the Panthers with a team-high 24 points and went 7 for 7 from the free throw line in the fourth quarter to help DeWitt seal the nonleague win over Pinckney (1-8). Grant Crawley scored 17 points and Zach Nevison added on eight points for DeWitt (6-3).

VERMONTVILLE — A 20-point fourth quarterer propelled the Blackhawks to a GLAC road win over Maple Valley. Bronson Clayton finished with a team-high 12 points and Zack Marciniak chipped in 11 points for Leslie (5-2, 2-1). Chanse Courtney notched 12 points and Ayden Wilkes tackled on 10 points for the Lions (4-5, 0-3).

Wyatt Bower came close to quadruple double, finishing with 11 points, 14 rebounds, eight steals and eight assists for the Cavaliers in their win over Clion. Braylon Socia added 10 points and eight rebounds, while Tarick Bower had a team-high 13 points for Corunna.

BRIDGEPORT — A late rally fell short for the Panthers in their setback to Bridgeport. Jacoby Dunlap had 14 points to lead Alma, which got as close as two in the closing minutes after trailing by as much as 23 in the second half. Sam Rosales had nine point and Michael Howey scored eight for Alma (5-3, 3-2).