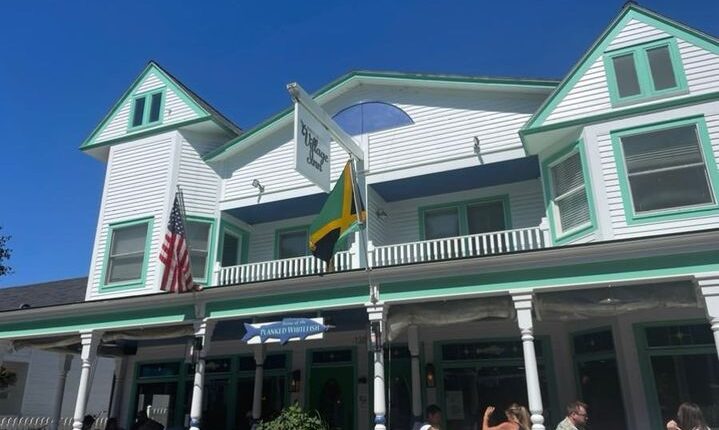 In 2000, Shawn Fearon traveled 1,961 miles from his home in Jamaica to Mackinac Island to work in the tourism industry.

Twenty-two years later, he owns a popular restaurant, Kingston Kitchen at the Village, on the island and has a bigger goal.

“My dream and vision is to have as many Kingston Kitchens as there are Outback [Steakhouse locations] and show the positive side of Jamaica,” said the 40-year-old earlier this month.

Mackinac Island, a popular destination site, is about eight miles in perimeter and sits on the Straits of Mackinac nestled between Michigan’s Upper and Lower peninsulas.

Fearon’s native country is vastly different from Mackinac Island, but he was excited and grateful about his opportunity. The two islands have different climates, with Mackinac’s cold winters shutting down most tourist activity, while travelers from around the world escape the cold in Jamaica and other Caribbean destinations. There are big demographic differences, as well, with 92% of Jamaican people being of Black African origin. Mackinac Island is 72% white, according to U.S. Census data.

Fearson said that his experience both living in Michigan and being a business owner on the island has been a good one.

“I have been accepted here,” said Fearon.

As a young adult, Fearon worked in the United States through a “non-immigrant” H-2B visa, taking jobs as a server and chef. The designation was created to support local economies with seasonal spikes in non-agricultural labor demand at resort-type areas like Mackinac Island. For decades, the Jamaica government has encouraged its citizens to seek job opportunities in the United States, which is how Fearon said he came to America.

The Kingston native operated a restaurant in Okemos, a suburb of Lansing, until 2020 when the COVID-19 pandemic began.

He had opened Kingston Kitchen at the Village Inn a year earlier in 2019. Large American and Jamaican flags hang over the restaurant’s front door. The menu marries Jamaican and American cuisine and includes a dish called “Caribbean Calamari,” as well as Jerk chicken fettuccine alfredo and jerk-seared Scottish salmon. Jerk is a style of cooking native to Jamaica, in which meat is dry-rubbed or wet marinated with a hot spice mixture. Northern Michigan whitefish is on the menu, too, as well as American-produced Angus steak.

Fearon said he is honored that Michiganders — Black, white and people of color — are proud of him. August is National Black Business Month, and, as he understands it, his is the only Black-owned business on the island. Tim Hygh, executive director of Mackinac Island Tourism, told the Detroit News last year to his knowledge, Kingston Kitchen is Mackinac Island’s only Black business.

Michigan has more than 44,000 businesses located or headquartered in Michigan, according to the Detroit Regional Chamber of Commerce.

Additionally, Fearon believes that his presence on the island can help to dispel stereotypes and one-dimensional thinking about Jamaica and its people.

“Jamaica is more than marijuana and Bob Marley,”  Fearon said, referring to the popular practice by some natives, especially those of the Rastafarian religion and political movement that combines Christianity, mysticism, pan-African political consciousness and includes the use of cannabis. Kingston Kitchen at the Village Inn offers an experience that keeps many people from below the Mackinac Bridge coming back.

“I ate there twice during the last [Detroit Regional Chamber of Commerce Mackinac] policy conference week,” said Matt Friedman, a Detroit public relations executive. “Best food I’ve had on the island in 20-plus years of trips. Superb service, too.”

“Great Jamaican food, spirits and fun,” the African-American Detroit Democrat said. “[Fearon] is always inviting and makes me feel at home on the island.”

“Seeing a Black Jamaican business thrive on Mackinac Island, is a story of fulfillment and freedom, bringing back the island’s once-indigenous roots, before European colonization and segregation. It showcases the power of diversity and inclusion,” said Harris, an African-American Detroit native.

Harris added that the business “is a model experience of how Black-owned businesses cannot just survive, but thrive, having a unique place on the island, while also basking in the richness of Black Jamaican cuisine and cultural excellence.”